One weekend, two tournaments and one fabulous way to closeout a wonderful year of competitive Golden Tee—Power Events’ Houston Holiday Classic is on the horizon, and you need to be there.

Jake's Philly Steak will play host to the event, which will get underway starting Thursday, December 5. It will run through that entire weekend, and by Sunday, December 8 two—yes, two—champions will be crowned. 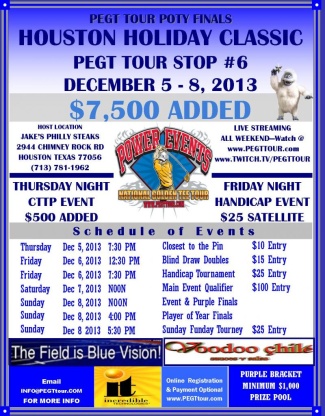 Unlike the five previous Power Event tournaments this year, the stop in Houston serves two purposes.

First, the Houston Holiday Classic (at least $7,500 added) will take place starting Saturday with a five-course qualifier, business as usual. Entry into this event is $100.

Once qualifying is complete, the tournament will begin later on Saturday evening, which is a slight change from other events. On Sunday, match play for the tourney will conclude and a champion will be crowned. And that’s not all.

After a brief timeout—maybe a little grub—Power Events’ Player of the Year Tournament will kick into gear. The 32 players who have earned the most PEGT Points throughout 2013 will compete once more in a double-elimination event for one of the year’s most coveted titles (and yes, plenty of cash.)

Later on Sunday evening, the second champion of the weekend will be crowned, and the Golden Tee tournament season will officially conclude for 2013.

It’s not just these two events that will take place over the weekend, either. There will be a Closest-to-the-Pin Contest on Thursday night, while the always-popular Handicap Tournament will take place on Friday.

If you’ve never been to a Golden Tee tournament before, this is the one you want to see. Whether you’re gunning for titles, or simply looking to learn a few shots on the new courses from some of the game’s best, Houston will have it all.

Oh and there will be plenty of food and beer, of course.

You can reserve your spot in tournament by visiting Power Events’ official website, although walkups are always welcome. We’ll be there, and we hope you are as well.

Stay tuned for much more on the Houston Holiday Classic.