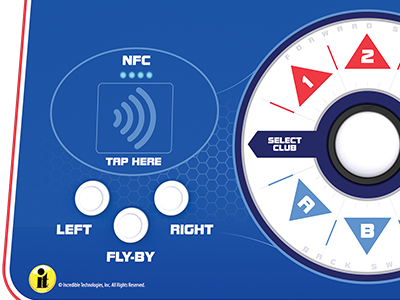 Golden Tee PGA TOUR cabinets are equipped with NFC (Near-Field Communication) devices to allow users to complete digital tasks or transactions with a simple touch. Gone are the days or physical player cards and card readers that don't work or get jammed up with coins.

1. What does NFC stand for?
NFC stands for Near-Field Communication. NFC essentially allows users to compete digital tasks or transactions with a simple touch—providing quick, secure check-ins for users. In the instance of Golden Tee PGA TOUR, the NFC will work with most smartphones and credit cards equipped with NFC technology.

3. What does a user need to utilize NFC on a Golden Tee PGA TOUR cabinet?
Players can use credit cards equipped with NFC technology to pay for games and goods on a cabinet. (More on that in a moment.)

First, however, players should download the Golden Tee PGA TOUR Caddy app in the Apple and Google Play stores. This app is critical for easy NFC login, and it will essentially replace the Golden Tee Player Card moving forward.


4. How can players log in using NFC?
Once the GT PGA TOUR Caddy app is downloaded, users can log in to their Golden Tee Player Account or create an account shortly after download. They can install their Digital Player Card on their NFC capable iOS or Android devices by touching the “LOG IN AND PAY USING YOUR PHONE” button at the bottom of the home screen which will permanently save this card from their device. This can be asked on the home screen by selecting the bottom button. This Digital Player Card will then be accessible from their device’s Apple Wallet or Google Pay Wallet.

The game will then confirm that their log in is successful.

5. How does a player pay using NFC?
There are a handful of ways for players to pay for games or other virtual goods using NFC. Many credit or debit cards are equipped with the technology. If the card has this symbol , it will be able to handle NFC payments much like a card reader would. Players can tap that symbol near the reader to execute a payment. Once competed, they will be prompted to the next screen.

Players can also pay for games and other goods using applications on their smartphones. Apple users can tap their devices near the NFC reader to pay with Apple Pay; Android users can tap their device near the NFC reader to pay with Google Pay (or GPay). Both applications will need to be setup on this device if they aren’t already, although like the Digital Player Card, they will be ready for permanent use after setup is complete the initial time.

6. How reliable is the NFC tap?
Incredible Technologies spent more than 12 months refining both NFC log ins and payments across both Apple and Google devices along with dozens of different credit cards. As long as a player touches the icon and reader closely and gently—highlighted by the green lights through the small holes on the control panel—users should have no issues assuming the previous setup steps are complete.

7. Is there still a card reader on the cabinet?
There is not. NFC log in and payments have largely replaced the card reader, and the functionality should be the same on most credit cards and devices. Players without NFC capable devices can still log in using the touchscreen on the right side of the cabinet and also pay for games and other good using cash or Player Account money. Players can add money to their player accounts in advance by logging into their accounts on Goldentee.com.

For more information on how to use Google Pay, please see the Google Pay Help website.

For more information on how to use NFC with your Apple / iOS device, please see this guide from Digital Citizen.