What is Golden Tee? 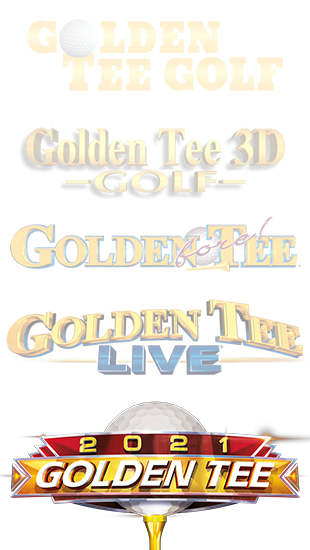 Since its inception in 1989, Golden Tee has become a ubiquitous part of barroom popular culture.

Throughout this time, millions have played on over 100,000 units in bars and pubs in more than a dozen different countries. The original title Golden Tee Golf was introduced long before anyone knew what it would become. A 2-D video golf experience, it was Golden Tee Golf's competitive nature and cutting-edge trackball control that formed the model of success that the game thrived off of ever since.

Its uniquely intuitive controls, coupled with a simple, yet highly competitive video game experience, earned Golden Tee the title of the "pool table of the next generation" among the masses. This paved the way for the success of Golden Tee 3-D in 1995 and Golden Tee Fore! in 2000.

Throughout those years the game went from a small nightly tradition for some, to a pop-culture phenomenon. The world came to expect Golden Tee in the corner of every pub and millions of players craved the competitive social experience that the game is famous for.

In 2005, the video golf mold was broken again with the release of Golden Tee LIVE – a revolutionary always-online version of Golden Tee. More than just a Golden Tee Fore! update, LIVE utilizes state-of-the-art technology to bring Golden Tee's excitement to new heights by simply combining it with a tried and true feature: competition. Real-Time competition.

At any point, in any pub, players can now compete against golfers from around the world. The addition of online play has created a new wave of stat tracking and competition where players can play for prizes and monitor their progress and improvement both on the game and Goldentee.com or with the new GT Caddy app available for Android and iOS.

In Golden Tee 2017, we changed the landscape of the game by introducing Player Invitationals. With 2018, we kicked the door in on that mode and introduced the ability to challenge your friends for up to $1000!

With our 30th anniversary in 2019, we launched Events Mode, our playground of various knobs that allow us to be more creative than ever with the way we design our contests. We customized daily and weekly prize play contests to have certain types of wind, casual tee boxes, smaller contests, bigger prizes and even the chance to play a round of 18 with only 5 clubs!

In 2019, PGA legend John Daly joined the game as part of Real Time Rivals mode! You and up to two friends can challenge a computer rival in three different divisions: bronze, silver and gold.

With the release of Golden Tee 2020, Freaky Friday courses made their debut in casual mode for the more laid back golfers. Real Time Rivals got more intense with 14 rivals to battle, including the ability to take them on in an online mode where you can use your custom golfer, club sets, balls and tees to take on John Daly and his team of golfers.

Golden Tee 2021 brings five brand-new courses straight from the mind of the legend himself, Jim Zielinski. We also remastered two more classics from Golden Tee 3D Golf and Golden Tee Fore! Events Mode has more fun and excitement added to it with the addition of 9-hole prize play and Money $hot contests to give players even more fun, different, and exciting ways to play for prizes!