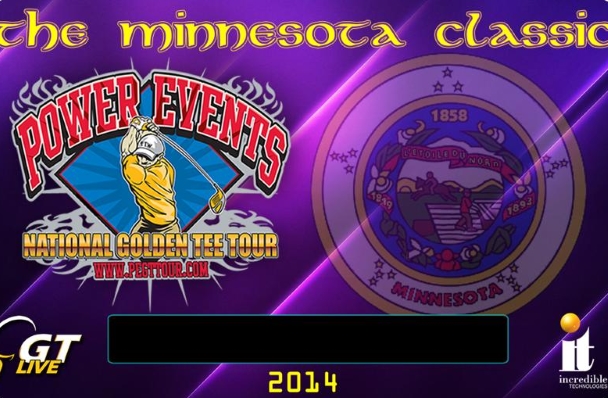 Ohio’s Andy Haas and Minnesota trackballer Chris Thorbrogger have played for a title before—a world championship, in fact—which is why the finals at the Minnesota Open was anything but a shock. After all, we’ve seen it.

Before we can get to that, however, you must know how we got there.

Power Events’ took its show on the road to The Land of 10,000 Lakes for the Minnesota Open. Although Minny isn’t new to the tournament scene, this marked the first time the PEGT Tour made the stop. And it did not disappoint.

48 players teed it up at Panino Brothers in Eden Prairie, and the event began with a five-course qualifier.

Andy Haas (remember him?) was tops overall a massive qualifying score of -132. Houstons’ mark Stenmark was second overall, firing a -127. North Carolina’s Paul “Putz” Tayloe rounded out the podium with a -126. The rest of the top 10 was as follows.

Match play began and Haas stayed hot. After firing three consecutive -25s, the former Golden Tee world champ threw up a -29 on Highland Links. He then beat local pro Andy Fox later in the bracket to earn a spot into the finals.

That -29 Haas posted just so happened to come against Chris Thorbrogger. As a result, Thor was sent to the other side of the double-elimination bracket. This meant his road to the finals would be slightly different (and a bit more stressful).

Thorbrogger, however, got through the gauntlet. He took out Texas trackballer Ed Godfrey in extra holes, squeezed past Stenmark and best Fox to play his way into the finals.

The rematch was on, and Thor got his revenge in the first game. Because Haas was undefeated heading into the finals, he would have to lose twice. The first loss came on Shady Acres in a close match. Haas then got down early in the second finals match, although a brilliant shot on the tricky Highland 16th put him back ahead. He closed out the final two holes without a scare.

With that, "Ship It!" was crowned Minnesota Open champion.

Special thanks to Power Events for putting on another spectacular event. Thanks must also to go out to the Panino Brothers staff along with the players that made the trip. You make these tournaments go.

Next stop? Richmond. Stay tuned to Goldentee.com for the details and visit PEGTtour.com for more.