It’s good to be king. It feels good to wear a crown. In Golden Tee 2015, you have a chance to embrace your love of royalty.

Be the best in your bar. That’s the name of the game in King of the Hill—an all-new feature that will launch with Golden Tee 2015 in late September. Simplifying it to a score-based competition, however, won’t begin to explore the depths of this casual playing mode.

There will be one king for every Golden Tee 2015 course per week. In that seven-day stretch, players will be able to dethrone each other on all five Jim Z gems. The best round will make that player king, until that score is beaten. And so on. And so on.

What makes this mode unique from anything in Golden Tee, however, is the process of becoming king. Not only will you take on the same course and conditions as the other kings (and hopeful kings), but you’ll also be able to see EXACTLY how the current king achieved his score.

The current king will also wear a virtual crown. Admit it; you’re already eyeing this beauty. 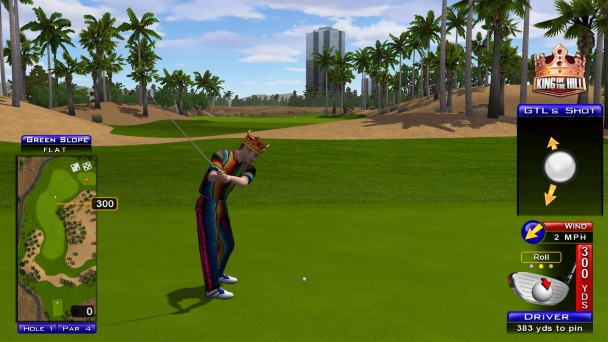 Playing solo? Not anymore you’re not. Have three players? Complete your foursome with the current KOTH. You’ll see every single shot the king made along with the movements he/she made on the trackball. It’s part teaching tool, part match. For those of you familiar with the “shadow golfer” from versions of GT, this might look somewhat familiar.

On Sunday night, when the matches have all been completed and the dethronings have taken place, a king from each course will be crowned. This person will be celebrated in the Attract Mode for the next week as the courses reboot, the conditions reset and the process starts all over again.

The spirit of Golden Tee has always been about local competition. Online play is obviously enormous, integral, appreciated and loved by a significant portion of the GT population. But for the players that simply want to celebrate bragging rights over buddies or at their local watering hole—or the group poised to embrace having their name in the lights—King of the Hill will provides a mode to do just that.

Want to try it? Please do. Check out where Golden Tee LIVE 2015 is currently on test.