NEWS
The Greatest Game Ever Played
How Andy Haas Shot a -36 in a Single Round of Golden Tee
http://twitter.com/share
Prev News | Next News 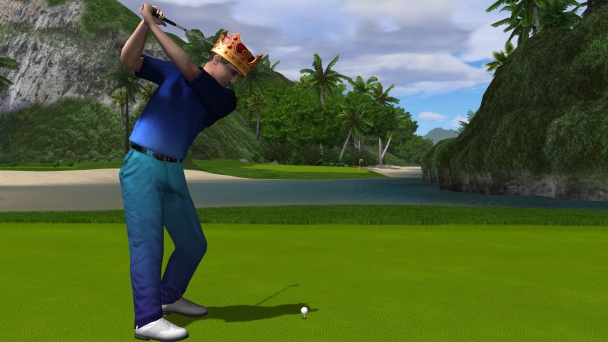 In an 18-hole stretch, a magnificent voyage into the Golden Tee absurd, former GT World Champion, selectable character in the game (see: above) and current Daily Contest magician Andy Haas birdied only one hole on Pearl Lagoon. One.

I suppose while talking about the greatest round of virtual golf ever played—a game in which the leaderboard surprised itself by displaying a score of 36 under par—we should start there.

It almost went in. His approach into the hole nearly dropped—resulting in nearly 8,000 Great Shot Points, just a small portion of the 188,463 he would collect when it was all said and done. But that was it. The rest of his round consisted of holes-in-one, double eagles and eagles.

“It was one of those rounds where every shot went in on the same game. It just doesn’t happen like this,” Haas said. “I’ll probably never do it again.”

Let’s get this mandatory disclaimer out of the way: Haas shot his game playing the Daily Contest, meaning he mad multiple looks before firing off a -36.

This wasn’t his second or third round of the day on these conditions—he had been going at it for a while after recognizing the potential for a monstrous score and after a handful of attempts that resulted in a near first-place finish in the contest. So he kept going.

The setup was perfect, at least for his playing style which is about having easily repeated shots with low-lofted clubs and short distances. It’s a recipe for success for any player; for someone of this caliber, it’s an opportunity to do something, if all goes according to plan—and it usually does not—that no one has done before.

“It’s not comparable to a blind round of Golden Tee,” Haas said. “But I’ve never done anything like this.”

A round of this nature has to start somewhere. For Haas it began on Hole 1. And Hole 2. And Hole 3.

He followed up his holeout on Hole 1 with aces on the next two holes.

He continued attacking pins by acing Hole 6—a shorter par-3 that had frustrated him up until that point. Two holes later he came away with his fourth hole-in-one of the front nine—this time nailing the par-3 8th.

He made the turn at an unfathomable 19 under par; it’s a score most would be thrilled with for an entire round. There was still a back nine to play.

He birdied Hole 10, as you know, and stayed the course until acing Hole 12, another par-3. Two holes later he holed out from the fairway on Hole 14. After an eagle on 15, he entered his final three holes already at the Holy Grail of Golden Tee scores—30 under par.

The setup, according to Haas, was not particularly favorable. Up until this point—at least by his own incredible standards—it had stumped him some. He swerved his tee shot around the trees blocking his path to the green and landed safe with a 32-foot putt that had right-eight break. It was the longest putt he had all round.

“Had it been a bit longer, I probably would have been a bit nervous,” Haas said. “I got up there and hit it quick. I didn’t want to think about it.”

For those curious—and goodness how could you not be—here was his hole-by-hole. Oh, and he took home first place in the Daily Contest, besting the next best score by four strokes. 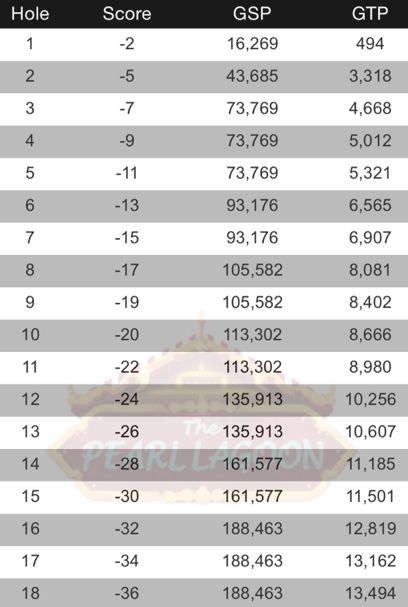 There are a few more numbers worth exploring beyond the obvious.

Although we rarely discuss Golden Tee Points, his total of 13,494 was monstrous. It was a product of eight different holeouts—an “eight better” in Golden Tee speak—which is also difficult to process.

In total, Haas finished six holes-in-one, one double eagle, 16 eagles and one birdie. He took only 36 strokes on a course with a par of 72. He needed only 10 putts, which is perhaps the most staggering number of them all. 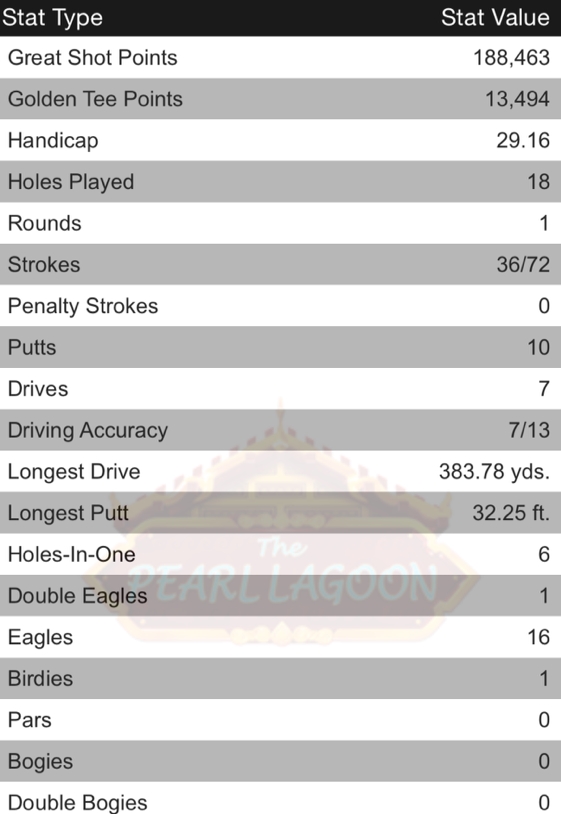 “The setup just has to be perfect,” Haas said. “This one just happened to have 10 different looks on holes that I felt really good with. Plus, you have to be lucky. The difference between just rolling past the cup and dropping in is everything.”

Perhaps another setup will be even more perfect. Perhaps virtual balls will continue to laser their way into virtual cups rather than right past.