You knew the scores would be low. No one, however, knew they could possibly go this low.

If the Houston Holiday Classic taught us anything, it’s that you can do a large group of dedicated players can do ridiculous things with a trackball. It also provided one of the more dominant individual GT weekends in the history of the game, and we’ll get to that. It would be impossible not to.

Power Events’ Golden Tee Tour is officially closed for the season. The Houston Holiday Classic and the Player of the Year Event both took place at Jake’s Philly Steaks, capping off another incredible year of PEGT Tour action.

On Saturday, the Houston Holiday Classic got underway with 85 players signed up and registered. The large tournament field kicked off the event with a five-course qualifier, and the scoring that followed was unlike anything the game had seen in some time.

To crack the top 32 and the main event, you needed to shoot at least a -126 over five rounds. This averages out to better than a -25 per game! This was a qualifier for the ages, and the more scoreable courses in this update made their presence felt.

The rest of the ridiculous Top 10 was as follows.

With the bracket set, match play kicked into gear. And after coming away with qualifying honors, Stenmark kicked his play into another gear.

Last year’s Player of the Year Tournament Champion didn’t fire anything less than a -27 in his matches. He played his way into the finals after beating Gossett in the king of the hill match.

Gossett, with one loss on his tournament resume, battled back. He fired an incredible -31—yes, -31—over Haas to play his way into the championship. He then followed up his ridiculous round with a clean -28, although it was not good enough.

Stenmark fired a -29 in the championship match to win the title, the first one handed out that day. The weekend was not done and neither was he. 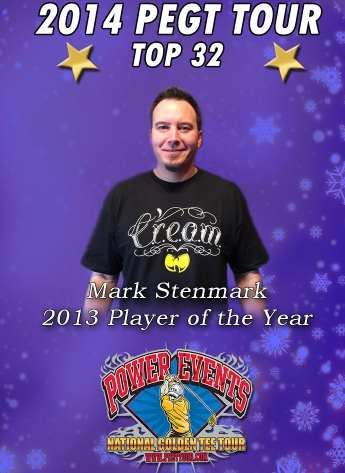 The players who accumulated the most PEGT Points over the course of the year at various stops on the PEGT Tour were placed in one final 32-man bracket. At stake? Big cash prizes and one of the most prestigious titles of the year—the Player of the Year.

As it turned out, things really didn’t change all that much.

Stenmark once again powered past the field,  throwing up multiple big rounds and no less than a -26. He took on fellow Houstonian George Von Koschembahr in the finals and he fired up one final -29. His bid for a -30 on Hole 18 just whizzed past the hole.

That was about the only thing that didn’t go right.

One weekend, two tournaments, one winner.

Congratulations to Stenmark on a fabulous tournament run and thanks to all the players who made it out to Houston and any other Power Events tournament this year, for that matter. That leads up conveniently to our next thank you.

A big thanks must go out to the fine folks behind the PEGT Tour. Each year is seemingly more successful than the last, and that was again a theme this year. Thank you for your incredible work once again.

With that, the Golden Tee tournament season is officially closed. Have no fear, however, it will be open in no time.

The PEGT Tour is back in 2015 and will kick off with the Orlando Open on February 5. Much more on this coming soon, although be sure to put this one in your calendar.