NEWS
World Ranking Update
We Look Back on the Month That Was and Examine Where Things Stand in November
http://twitter.com/share
Prev News | Next News 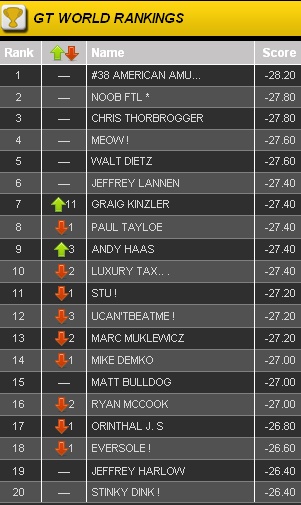 By now, many of you have improved your scores on the five new courses and likely gotten more comfortable with GT’s latest update. As we’ve turned the calendar to the second month of the GT 2012 era, we’ve also embarked on our second month of the Golden Tee monthly World Rankings.

Last month nearly 17,000 players received their Golden Tee World Ranking by playing each Golden Tee 2012 course at least one time. As for the top of the monstrous leaderboard, it was insanely competitive up until the final hour.

Houston’s Mark Stenmark took home Player of the Month honors, but my goodness was it a close race. Mark finished the month with an average score of –28.20 along with 377,858 Great Shot Points.

Right on his heels was North Carolina’s David Duncan. David also finished with a average score of –28.20, and posted an impressive 365,146 GSPs. These two battled back and forth until the very end. Ohio native Andy Haas finished third (-28), followed by Minnesota golfers Andy Fox (-28) and Lance Harris (-27.80).

October, however, is in the past and players are already looking to improve their positioning from the month before. Thus far the top of the leaderboard looks very similar to last month, only this time are top finishers have flip-flopped. David Duncan is currently tops overall followed by Mark Stenmark as the two have been dominating since 2012 shipped.

If you’re new to the Golden Tee World Rankings and looking to get involved, getting your rank is simple.

Play each 2012 course once (five games total) and you’ll get a leaderboard ranking. Your best game on each course will be averaged to give you an overall score. This means your ranking will improve throughout the month if you beat your monthly course best. At the end of the month we’ll reset the rankings and you’ll have a chance to beat your previous month’s score.

The green and red arrows on the GT World Rankings Leaderboard, which are now active as we enter the middle of November, showcase how your positioning has changed relative to the previous month.

To find yourself on the online leaderboard, simply type in your Persona ID, aka the number on the front of your Golden Tee Players Card, and you’ll be taken to the page where you’re currently ranked. If you are playing with a credit card or are unaware of your Persona ID you can find it on home page after logging into your web account. You’ll also be able to see your current ranking in the upper right corner of the payment screen once you check in.

We’ll have plenty more updates as November moves along. Hit ‘em straight and stay tuned to LIVEWIRE for more.