NEWS
Recapping the 2017 Missouri Open
Over 110 players battled it out this past weekend
http://twitter.com/share
Prev News | Next News 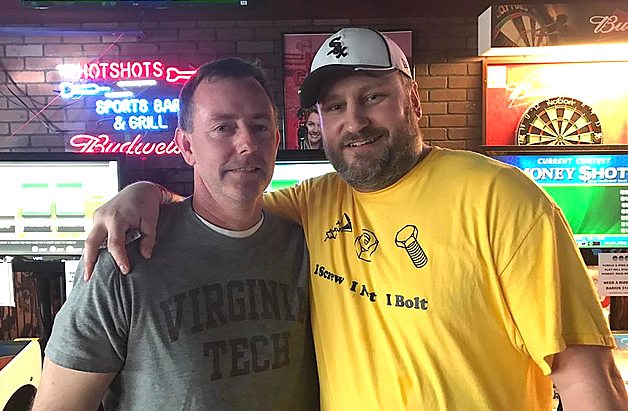 When the signups for the 2017 Missouri Open had reached 110 players by the week of the tournament, we knew this event was going to be special.  By the time everything was said and done on Sunday night, the event had lived up to the hype and completely exceeded expectations set forth at HotShots Sports Bar and Grill in St. Charles, Missouri.

The world of Golden Tee was at a standstill on Sunday when Virginia golfer Kevin O’Connor (Catfishin) played some of the best Golden Tee of his life, taking out top players Andy Fox, Andy Haas, Lance Harris and Paul Luna on his way to the finals in the 2017 Missouri Open.

O’Connor took his first loss of the day against Marc “The Mouth” Muklewicz in the King of the Hill battle.  Kevin missed a tough chip on Hole 14 of Ruby Rock, the par 3 with an uphill slope of 10 degrees.

Not everyone that plays Golden Tee knows the name Marc Muklewicz, but they know the Golden Tee player that goes by “The Mouth.” They’ve either seen his name at the top of the GT leaderboards or if they are lucky, they have experienced his lively and exuberant personality at any number of tournaments in the last 10 years.

After bouncing back from his first lost, Kevin defeated Missouri’s own Paul Luna, to set the finals; Kevin O’Connor vs The Mouth.  The two headed back to Ruby Rock to determine the 2017 Missouri Open Champion.  Kevin would have to defeat Mouth twice to win.

After an intense battle in game one, O’Connor was able to take Mouth into sudden death after 18 solid holes of golf by both players.

Unfortunately, a simple mistake cost O’Connor the game when he accidentally put roll on his approach shot on the par 5 Hole 7.  With one missed chip from the bushes by his opponent, Marc Muklewicz went from “The Mouth” to “The Champ.”

Marc “The Mouth” Muklewicz bested over 110 Golden Tee players to take home the title of 2017 Missouri Open Champion.  A Golden Tee player since 2005, this is Mouth’s first Power Events tournament win.  Consistently a top finisher at tournaments, his last year has included strong runs in the 2016 Worlds, the 2016 Houston Open and the 2017 Wisconsin Open.  Now, all that is past him and he can finally say he is a champion.

Congratulations to Mouth, Kevin O’Connor, Paul Luna and Clint Grover on their great finishes this past weekend.  Power Events put on another amazing tournament, and with the help of our new friends from HotShots Sports Bar and Grill in St. Charles, the Missouri Open will only continue to grow!

But, before we get to the June tournament, we have another event you might be interested in.  A little get-together called the 2017 Golden Tee World Championships will take place May 19th through the 21st in Las Vegas.  Although our field of 64 competitors is already locked in, the event itself is open to the public and we would love to see you all there.