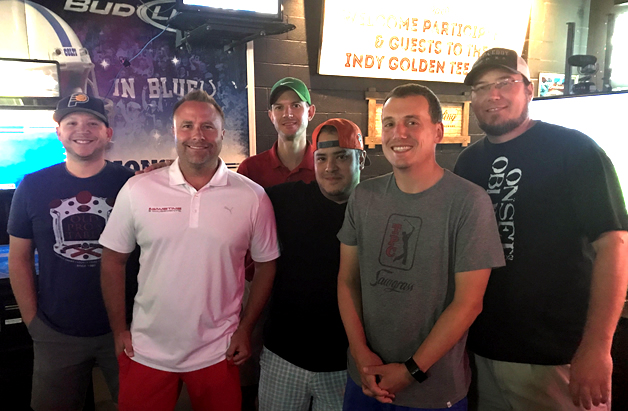 It was a great weekend of Golden Tee at The 2017 Indy Open, hosted by Old Pro’s Tables in Indianapolis, Indiana.  The brainchild of Jason Kendrick and Game Time Amusements featured a handful of amateur and pro events throughout last weekend.

Jeff Sutyak and Robert Cote kicked off the weekend on Thursday by winning the Pro-Am #ThrowbackThursday doubles tournament, while the team of Chris Goodin and Graig Kinzler were the winners of the doubles tournament on Friday.   Clint Grover won the Pro Eliminator and Dave Sandmire won the Amateur Eliminator on Saturday night.

The main event took place on Saturday and Sunday with 12 players in the amateur bracket and 28 in the pro bracket.  Seeding was determined in a random three course qualifier which ended up being Juniper Falls, Sandy Reef and Teal Gardens.

By late Sunday afternoon, the brackets were down to less than a dozen, with two-time world champion Andy Haas was taking on Paul Luna to determine who would stay undefeated going into the finals.

Luna overcame Haas two games to one on his way to the finals.  Although not eliminated, Haas still had his work cut out for him on the loser's side of the bracket as 2017 World Champion Mark Stenmark took on Jeff Sutyak from OH for 4th place.

After a few mistakes by Sutyak on Teal Gardens, he lost to the 2017 World Champion with a score of -23 to -29.  With Sutyak taking 4th place, that meant that Stenmark would battle Haas, for 3rd place.

Unfortunately for Stenmark, Haas’ hole out on hole one of Juniper Falls set the pace for the round as Stenmark lost to Haas -22 to -29.

This meant that the 2017 Indy Open finals was set; Luna vs Haas II.

The finals is a best of five series and this one delivers plenty of action!  We highly recommend watching the LIVE video from Golden Tee TV.  Our own Kevin Lindsay joins Indy player Mike Johnston to call the action.

After a few good games and a DNF from both players, the action went all five games with Paul Luna once again taking down Andy Haas in the end and successfully defending his Indy Open title!

After hours of back and forth action in the amateur bracket, Zach Pilger of MO defeated Dave Sandmire of WI in a best of 3 series to win the amateur title!

A huge thank you to Brandon Birnell and Old Pro’s Table for their wonderful service throughout the weekend, thank you to Golden Tee TV for providing LIVE coverage of the event and thank you to Jason Kendrick and his team at Game Time Amusements for putting together another fun weekend of Golden Tee!

Our next Golden Tee Tournament is happening in a few weeks, August 24th-27th, in Cincinnati, OH at Power Event’s Queen City Classic.  James’ Third Base Sports Bar and Grill is hosting that tournament for the second year in a row and it’s shaping up to be another huge tournament.  Rumor has it that there will a Golden Tee 2018 beta machine at the tournament….and the rumors are confirmed!