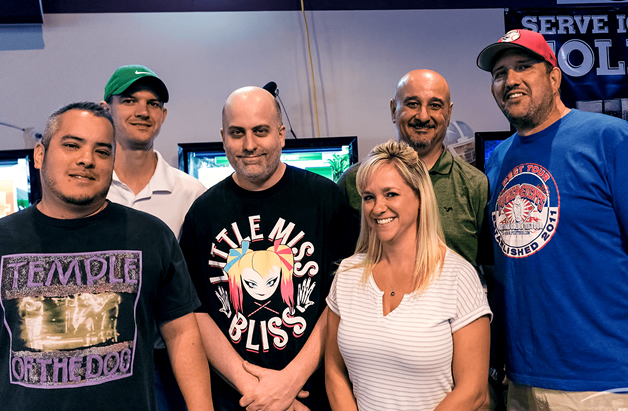 It was another busy weekend of Golden Tee for over 70 players at the second annual Queen City Classic in Ohio.

It was Power Events’ last tournament to be played on Golden Tee 2017 courses and throughout the weekend the competition was fierce and the scores were low!

All of the action took place at James’ Third Base in Mason, not far off from Cincinnati!

After Saturday’s five course qualifier, Paul Luna was once again on top with an overall score of -145.  Following him were Brian Olde with a -142, Jeff Sutyak with a -141 and Sean Gervais and Ryan Sparks with -140!

Top seed Luna was quietly defeated in his first match by Steve Kramer on Pine Coast. That victory set Luna off though, as he defeated 8 other players in the losers bracket to make it to the finals.

While Luna was putting in hard work on the loser’s side to head to the finals, his soon-to-be opponent (and King of the Hill) Jeff Sutyak, playing in his home state of Ohio, was able to overcome 4 players on his way to being KOTH, including two-time World Champion Andy Haas.

Unfortunately for Sutyak, his first Power Events’ tournament victory was not to be, as a small mistake early on in his match again Luna on Ruby Rock caused him to lose game one of the finals.

The second match was on Sandy Reef and at this point Luna had victory on his mind as he threw down a -32 to give Jeff his second loss of the day and claim the title of 2017 Queen City Classic Champion!

The final two matches can be seen in their full length thanks to Golden Tee TV, with commentary provided by our own Kevin Lindsay and two-time GT World Champion Andy Haas.

The next Power Events tournament comes to you in early October at the NIV (Not in Vegas) 15! The longest running Golden Tee tournament is hosted by Jeffrey Alums and Baja Bean in Richmond, VA, it will be a celebration of a lifetime that you don’t want to miss!

There are also a few smaller Golden Tee tournaments happening in September that we are also excited to share news about.

The first tournament is the Golden Tee for Hope tournament on September 16th at Boston’s Restaurant in Newburgh, Indiana.  It’s a 65% handicap tournament for charity and more information can be found here.

The other tournament in September to be on the lookout for is the Pacific Northwest Golden Tee tournament in Gig Harbor, Washington on September 22nd-24th.  More details on this event can be found here.