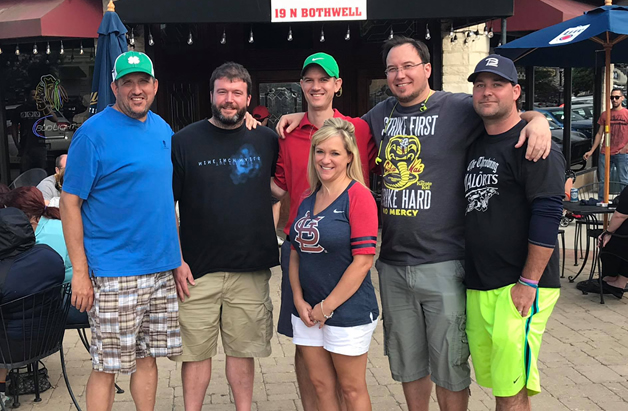 This year’s tournament was hosted by a wonderful new venue, JL’s Pizza and Sports Bar in Palatine, IL.  The food was delicious, the drinks were flowing, the service was fast and trackballs were spinning firociously between Thursday and Sunday.

When the five course qualifier was finished on Saturday afternoon, North Carolina’s Paul Tayloe was the number one seed with a score of -142. The rest of the top 10 was as follows.

Although top seed, Tayloe was knocked out midway through the tournament, losing to Indiana player Matt Kavanaugh and being eliminated in his fourth match by 2017 Missouri Open winner Marc “Mouth” Muklewicz. Like Tayloe, The Mouth’s tournament run did not last much long as he lost his next match to Lance Harris in overtime.

Former World Champion Graig Kinzler made a deep run in the tournament, defeating a handful of players before losing to Jeff Sutyak of Ohio and taking 3rd place. Kinzler’s heroics on Hole 18 of Pine Coast—besting Missouri’s Sean Gervais with a miraculous ace to grab victory—was perhaps the moment of the tournament.

Sutyak battled his way on the winners side to make it to the King of the Hill match against 2017 GT World Champ Mark Stenamrk.  Stenmark took Sutyak's -27 down with his own -29 on Sandy Reef.

Being defeated once, but not out of the tournament, Jeff battled back on the loser's side by taking down Graig Kinzler on Teal Gardens to earn a rematch against Stenmark for the 2017 Windy City Open championship.

To defeat the King of the Hill and become champion, Sutyak would have to defeat Stenmark twice.

Unfortunately for Sutyak, Stenmark threw up a -29 on Pine Coast to his -27 and secured another Power Events tournament victory.

Thanks once again to Power Events for a job well done, JL’s Pizza and Sports Bar for a wonderful debut and everyone else for coming out to compete. Congratulations to Mark Stenmark, now the proud owner of back-to-back victories, on a another great run.

Stay tuned for more on our next tournament stop—we’re off to Indy!