What happens when you put together one of the toughest tournament fields of 2013 and have these players tee off on relatively easy course setups?

Big, big scores; and this year’s Missouri Open featured plenty of it.

81 players teed it up at Power Events’ monster event. Redbirds Sports Cafe & Billliards played host to the tournament for the second consecutive year, and the play—as expected—was enormously competitive.

The cut to make into the main bracket was the highest in recent memory. All players took on each of the 2013 courses, and -109 was the score you needed to get into the top 32. Florida’s Sean Gervais was the top overall qualifier, and the rest of the top ten was as follows. The full qualifying results can be found here.

With such a strong field in place, staying unbeaten would require a truly epic run. Two individuals that were up to such challenge were Illinois pro Jeff Lannen and Texas up-and-comer George Von Koschembahr.

Although Lannen has been around the tournament block, George Von Koschembahr might be new to many of you. From the looks of it, Golden Tee could have a star in the works.

The two powered through the champions bracket, taking out former world champions and everything in their paths. Playing in the king of the hill match, however, it was the experienced Lannen besting Von Koschembahr -25 to -23.

They weren’t done yet, however.

With Lannen firmly in the championship match, he needed an opponent. As the losers’ side of the bracket played down, it eventually came down to a good ol’ fashion Texas showdown.

Playing on Coconut Beach, Stenmark got up big early but Von Koschembahr battled back. In the end, it was Von Koschembahr bouncing Stenmark -24 to -20. He was the only player to beat Stenmark in the tournament, doing so twice.

This set up a marquee championship rematch between Lannen and Von Koschembahr. Because Lannen didn’t have a loss, however, Von Koschembahr would have to beat him twice.

Playing on Bear Lodge, Von Koschembahr entered the 17th hole up a stroke, but Lannen mustered up an incredible hole-in-one on the tricky par-3 to battle back. Each eagled the 18th hole, and it went to sudden death.

In sudden death, however, it was Lannen prevailing, picking up a stroke and the tournament title in the process.

One of Golden Tee’s toughest tournament players, Lannen showed it over the weekend by besting perhaps the toughest field on 2013. As for George Von Koschembahr, what a run. I imagine the first of many.

Thank you to everyone who came out to Redbirds for a wonderful weekend, and special thanks to the bar for being great hosts (again) and Power Events for continuing to raise the bar when it comes to live tournaments.

Next stop: Chicago. We'll have more on the next tournament soon, stay tuned. 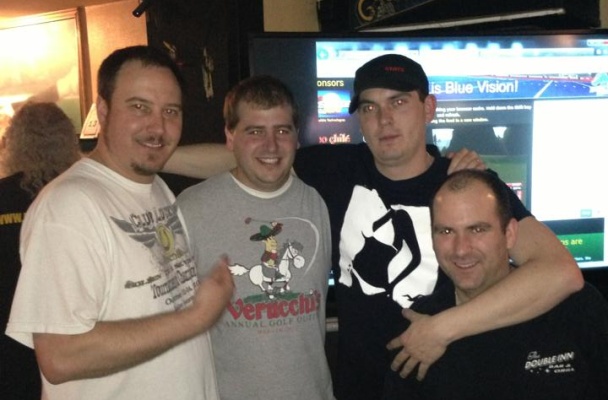