NEWS
Things are getting BIG in St. Louis!
Golden Tee’s third tournament of the year is only two weeks away!
http://twitter.com/share
Prev News | Next News 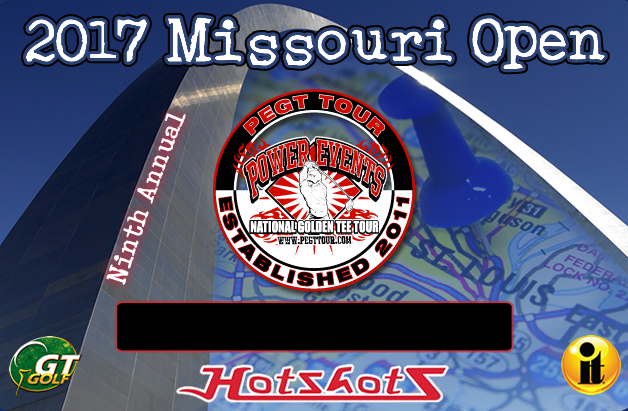 After kicking the year of tournaments off in the sunshine state of Florida and then battling it out in the plains of Wisconsin, our next Golden Tee tournament takes place April 6-9 at Hotshotz Sports Bar and Grill in St. Charles, Missouri!

The second stop on Power Events’ 2017 Golden Tee Tour kicks off on Thursday, April 6 with a Closest-to-the-Pin event as well as a Money Shot best two-out-of-three event. The entry fee for both events is $10 each and they will be double-elimination.

The following day, the main event will begin at noon. Tournament entry is $100. There is also the option to pay $20 to be included in the hole-in-one side pot.  There will be at least 16 machines to accommodate some of the best players the Golden Tee world has to offer.

All golfers will take part in a five-course qualifier on the 2017 courses. The 32 players with the combined lowest scores will be placed into the main bracket. With a current field of over 110 players, seeds 33-96 will be placed in the purple bracket.  Any players left after that will battle it out in the coveted pink bracket.

On Sunday, double-elimination match play will decide the winners of all three brackets as we work to crown the 2017 Missouri Open Champion.

With the Missouri Open being one of the larger tournaments held throughout the year and with the potential for the field to break the record of biggest attendance in the Power Events’ history, the weekend of April 6 is shaping up to another amazing weekend of Golden Tee Golf.  Even if you are a new player, come out, play Golden Tee, learn shots you never would have dreamt of, have a few beers and make some lifelong friends!  It will be a very fun weekend.

For more information or to sign up, visit PEGTtour.com or check out the Facebook page for the event. Walkups are always welcome as well.