NEWS
How the Marquee Was Made
Introducing the Golden Tee 2017 Marquee and the Story Behind It
http://twitter.com/share
Prev News | Next News 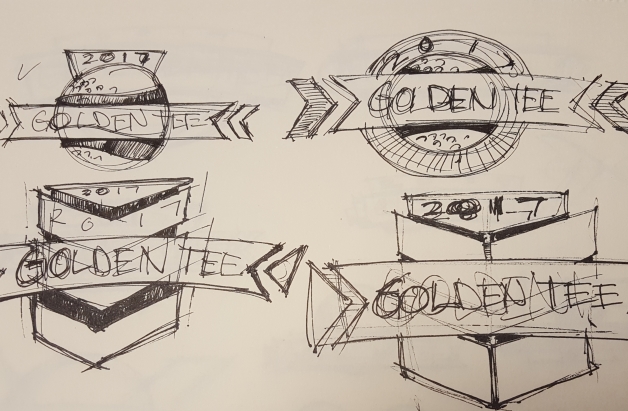 The contents of Sean McMenemy’s notebook tell a tremendous tale—one of creativity, imagination, persistence and countless hours. As a senior artist of Incredible Technologies, McMenemy was tasked to create the marquee for Golden Tee 2017—as he was a year ago and the year before.

And while such a duty may seem somewhat simple in nature—draw it up, plaster it on the game, and let’s go—there are a method and a mindset when it comes to creating the album cover to a new installment of Golden Tee.

“Last year it was about incorporating more of a sports feel, and we liked the direction. We wanted to keep that theme,” McMenemy said, his hand resting on the cover his notebook, filled with the doodles that led him to his final creation. “But this year we really wanted to bring it more toward golf. This is much more blatant and direct than any of the others we’ve created in a while.”

Golden Tee, after all, is a golf game. Those who have hung around a while chuckle at this very notion. Such a statement is like eating, drinking, or sleeping. Well, yeah.

But the marquee serves as the face of the game; it’s the theme that players will be introduced to here and on the cabinet. So when McMenemy set out to create something that outlined what we believe will be the most ambitious update in the history of LIVE, he set out to push the face of the product forward while also embracing its roots.

“I wanted to put my touch on it,” he added. “It’s the first thing people see, and it’s a bit different from what we typically do. I almost thought of it as a car emblem, something recognizable but clearly different and unique.”

The general design takes massaging. McMenemy’s notebook is loaded with concepts, from the early attempts that didn’t gain traction to the concepts that ultimately led to the final solution. 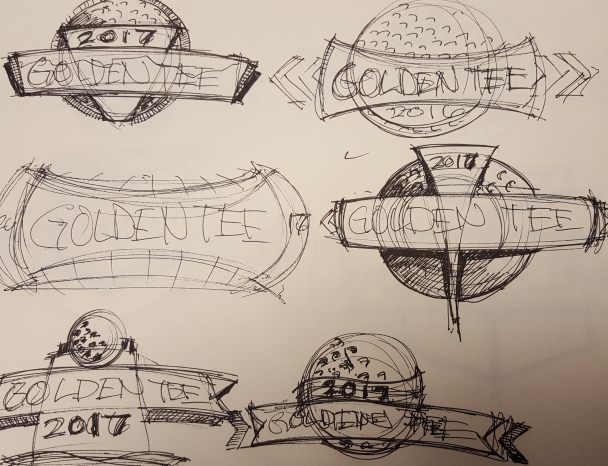 Pages upon pages of doodles that he worked on before he moved his work onto his desktop. It’s all here, one turn after the next. Once his notebook gets closer, it’s almost there.

From here, it’s about feedback and tweaks. Working with other artists on the Golden Tee team, he works on different adjustments to make sure it feels right.

Does it fit the update? Does it look the part? Has the idea been realized?

Then there are the colors, which is perhaps the most experimental part of the process. This is an endeavor in itself, especially in an age of dimly lit bars and illuminated marquees. After putting his final design through the rainbow, he found what he was looking for.

From the brainstorm to the actual building, the Golden Tee 2017 marquee went through a handful of drafts and ultimately took a few weeks. The final result, a brilliant combination of futuristic vintage, is much more golf than we’ve done in the past.

It’s the result of this notebook, which is more or less the extension of a brilliant man’s mind. It is exactly how we got here. And soon, very soon, it will be everywhere. The symbol of the latest update that we believe will change the way Golden Tee is played and viewed moving forward.