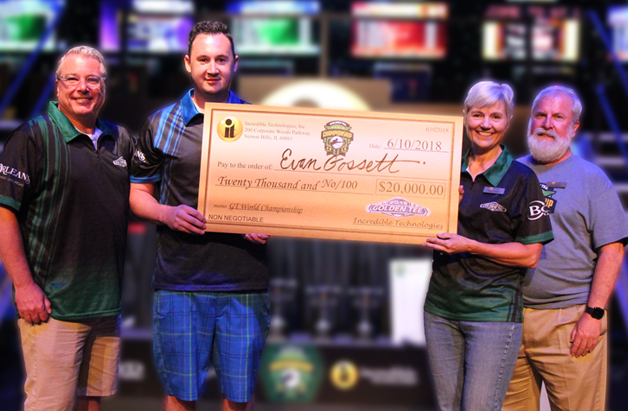 In a matter of a few days, the Orleans Showroom inside The Orleans Hotel & Casino in Las Vegas was transformed into a super-stage that highlighted 64 of the best Golden Tee players and beyond!

It all started with the Closest to the Pin contest on Friday night that had over 120 participants!  That was between Worlds qualifiers, traveling GT players, local Vegas players and even some key figures in Golden Tee history!

Our special appearances were capped off by Elaine Hodgson, Richard Ditton, Larry Hodgson, Jim Zielinski and even Duffer Dan! 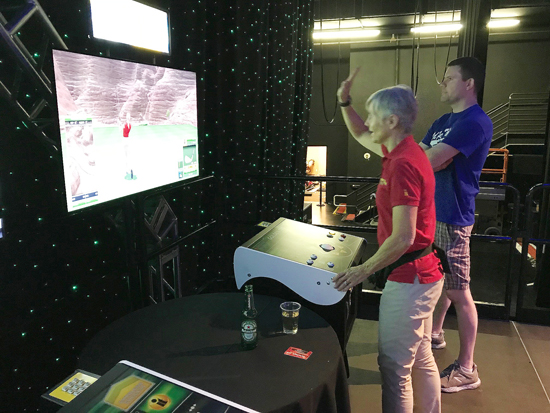 When it was all said and done, Marc "The Mouth" Muklewicz took home first place in the contest and the $1,000 top prize!  Dave Sandmire, a dedicated player and fan from Wisconsin, won the 64th entry into the World Championship by beating Tony Johnson on Hole 9 of their match!  You can see that clip, as well as the rest of the CTTP LIVE stream below! 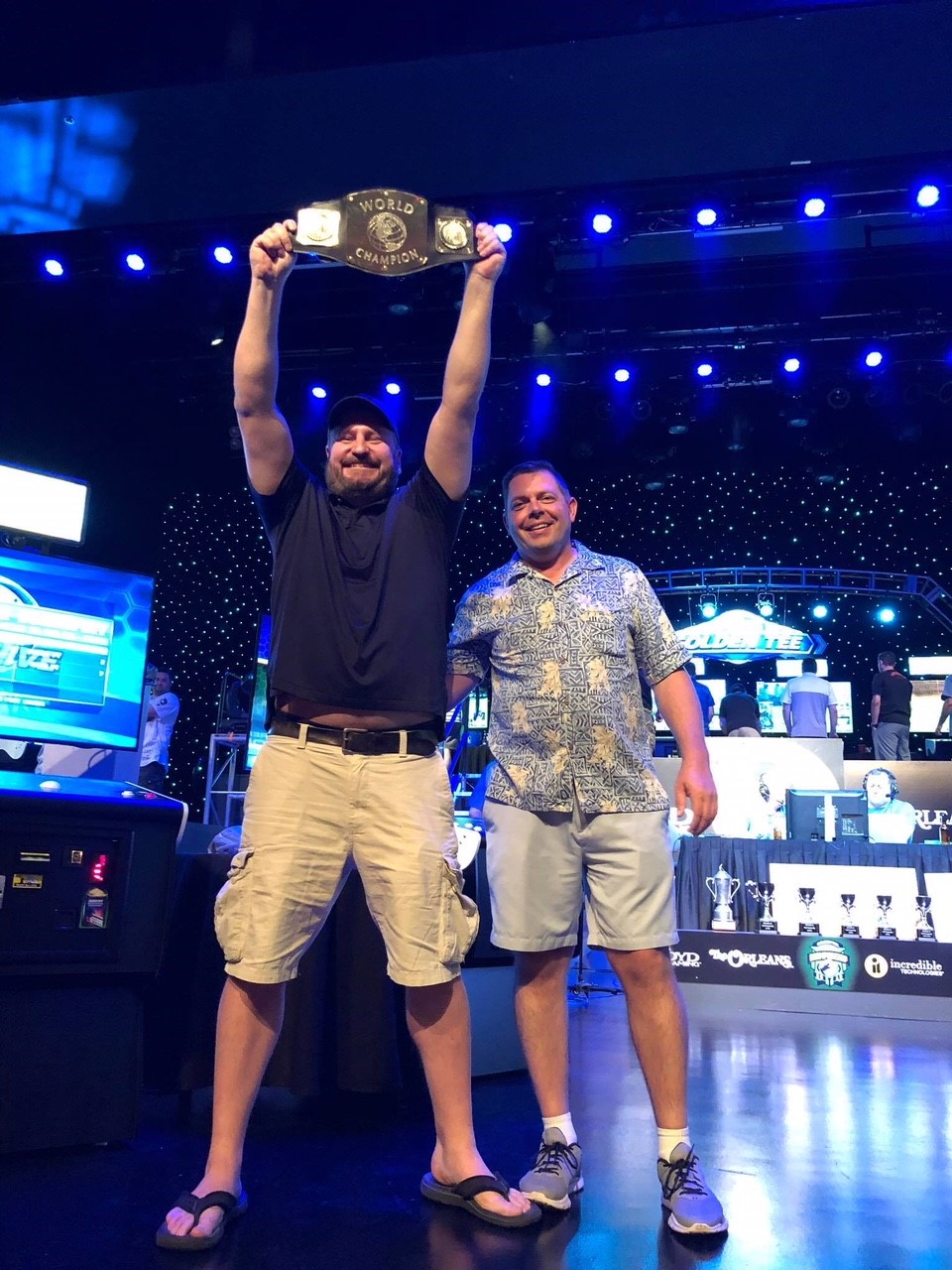 After the excitement of the Friday night CTTP contest settled down, the 64 qualifiers played five courses on Saturday to determine who would make the top 32 Gold bracket for the World Championship and which players would move down to the Silver bracket.

On early Sunday morning, the 32 players in the Silver Bracket fought in a single-elimination competition to determine who would win the $3,000 top prize and the title of Silver Bracket champion!

Clint Grover of IL was able to win five straight matches in a row, including a great final against Luke Nelson of MN in order to go undefeated and claim the title of the Silver bracket champion! 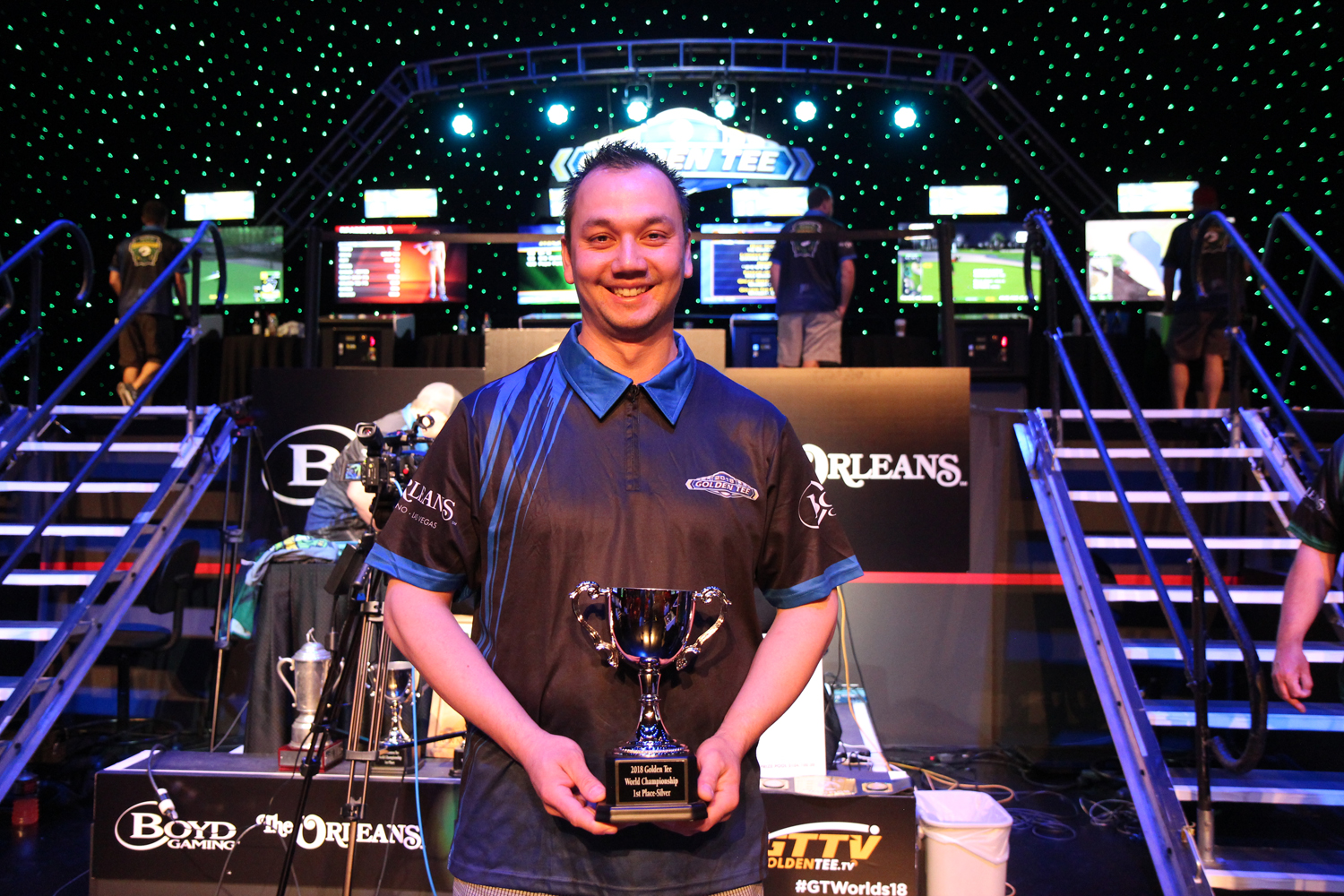 After the Silver bracket was completed, the top 32 qualifiers competed for the coveted title of Golden Tee World Champion and a check for $20,000!  We knew it was going to be an afternoon of upsets when 2004 World Champion Jeff Harlow gave two-time World Champion Andy Haas a loss in the first game of the gold bracket.  One of the top favorites when it came to the odds, Paul Luna, was also knocked down to the loser's side of the bracket when Evan Gossett beat him -31 to -26 on Rattlesnake Ridge.

Gossett continued his winning streak by beating Harlow on Safari, while then beating Seth Standefer on Rhineland.  On the other side of the winner's bracket, Joe Massara beat Will Sandstad, Tony Johnson and Oliver Ayala.  In a hard-hitting match-up, Massara also handed the defending World Champion, Mark Stenmark, his first loss of the day in a great overtime match on Royal Dubai.

Evan Gossett and Joe Massara met for the first time of the day on Mayfield.  This match was special because not only would it determine who would walk in to the Championship match undefeated, but these two players spend hours a day playing Golden Tee together at the Powercade in St. Peters, MO.  It was a great match between two of the best players in the game, but it was Gossett who would walk away with the victory in this King of the Hill match thanks to a -31 score.

On the loser's side of the bracket, Jeff Harlow ran through Jeff Lannen, Tony Johnson and even knocked out the 2017 World Champ Mark Stenmark to make his way to the 3rd/4th place match.

His opponent in that next match would be Seth Standefer, a great player out of TN, who admitted that he doesn't have the best luck when it comes to tournament match play.  Seth, who arguably played some of the best Golden Tee in recent tournament memory, defeated Paul Luna in an exciting overtime victory on Rattlesnake Ridge.

At this point in the day a few things were clear; we were going to have a brand new world champion, 3/4 of the remaining competitors were from the Powercade in MO and if you would have asked Standefer or Harlow how they were going to play earlier in the day, neither of them would have predicted they'd go this far.

Unfortunately for Seth, 4th place is where his World Championship chase would stop.  He was taken down by the former world champ Harlow in another competitive match on Mayfield.

In the next match, after spinning Calypso Key, Joe Massara would end the incredible showing that Jeff Harlow put on (14 years after his first Golden Tee World Championship victory).  Massara was victorious in that game with a score of -27 to -25.

So with that victory, the rematch was set.  Joe Massara would have to beat the undefeated Evan Gossett in two straight matches in order to become the 2018 World Champion.  You can watch the final matches of the 2018 Golden Tee World Championship below thanks to Golden Tee TV.

Joe Massara secured victory in the first game on Rattlesnake Ridge with a score of -32 to -28, handing Gossett his first loss of the day.  If Gossett was defeated once again, then Joe Massara would become the World Champion.

Unfortunately for Joe, his first-game victory would be short-lived as Gossett drained a 64 yard shot on Hole 12 during an intense back-and-forth match-up, securing his victory on Rattlesnake Ridge and becoming the 2018 Golden Tee World Champion! 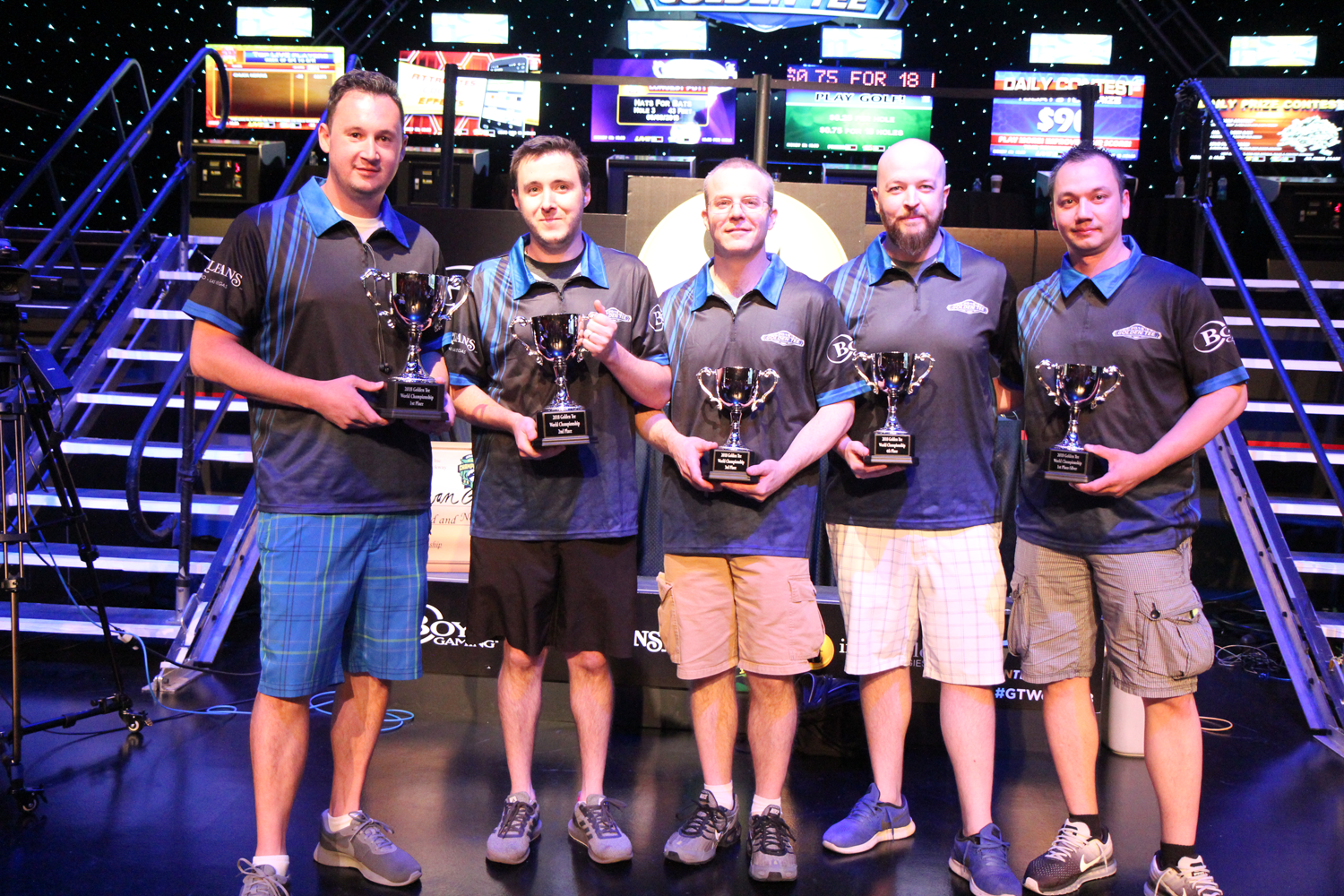 A huge thank you to Boyd Gaming and The Orleans Hotel & Casino for helping us put on this event.  We made so many memories this weekend and had a number of "firsts" at the World Championship that we can't thank you enough.

Another huge thank you to our 64 qualifiers and their friends and family who joined us in Las Vegas.  Without the dedication of those players and all hundreds of thousands of our Golden Tee players, we wouldn't have had as much fun as we did.

It was a long week for the entire Golden Tee team, but together, we all made it very, very much worth it.  We will have more photos, videos and recaps of the event in the coming days and weeks!