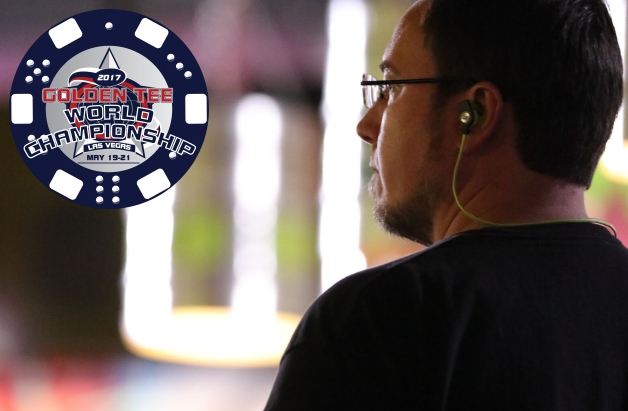 LAS VEGAS – To those who have followed the game closely for some time, the Golden Tee 2017 World Championship served as a culmination of sorts. A moment that, despite its unlikely journey, was inevitable in many ways.

At some point, after so many matches won and tournaments conquered, Mark Stenmark would have to win. His face would have to be in the game. And soon it will be. It just never expected to come quite like this.

The world’s finest players flocked to Hi Scores Bar-Arcade in Las Vegas, Nevada for the Golden Tee 2017 World Championship. After more than six months of qualifying and thousands upon thousands of games, it was time to decide a champion.

The weekend began with a Closest-to-the-Pin event on Friday night—a separate welcome event for the weekend—that was won by Steve Bailey, an Indiana Golden Tee player who made the trip to watch his friends play.

Not only did Bailey win, but he won on the final shot of the evening—a true Golden Tee “walk off.” Perhaps then we should have known what was in store over the next few days. Perhaps this was a sign.

On Saturday, all 61 participants competed in a five-course qualifier to determine the main bracket. The 32 players with the combined lowest scores across all 2017 courses would have a chance at the title.

Scoring, as expected, was intense. Missouri’s Evan Gossett paced the field with a combined score of -144 with 193k Great Shot Points. North Carolina’s Paul Tayloe was second, also firing a -144 with 180k in GSPs. 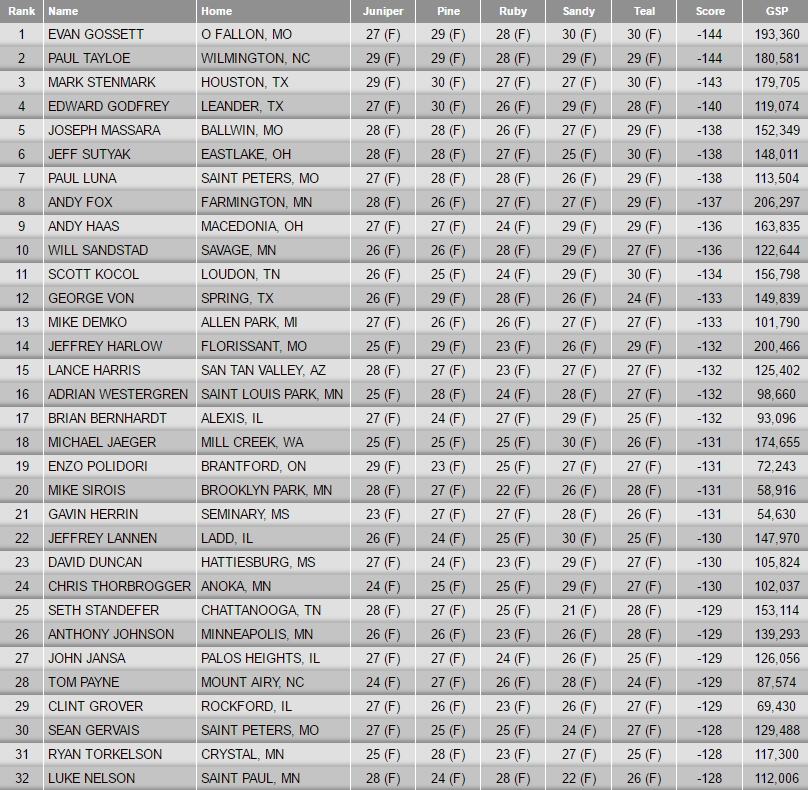 The bracket reset from there.

Having played not nearly the same volume of games heading into the weekend, Stenmark kicked off his match play by edging Sean Gervais to -29. Although there was a time when everyone in the room would assume a deep run from a player who produced arguably the greatest two-year stretch in the history of the game, this was different.

But there Stenmark went, taking down Canadian Enzo Polidori followed by Scott Kocol with -28s. He then dropped another -30 against Arizona pro Lance Harris to move into the king-of-the-hill match.

His opponent, Joe Massara, a Daily Contest wizard and one of the game’s greatest up-and-coming talents had a chance to make the finals as well. The winner of this match would be in prime position: guaranteed no less than second ($5,000) and breathing room in the finals, having the opportunity to lose a game and still prevail. 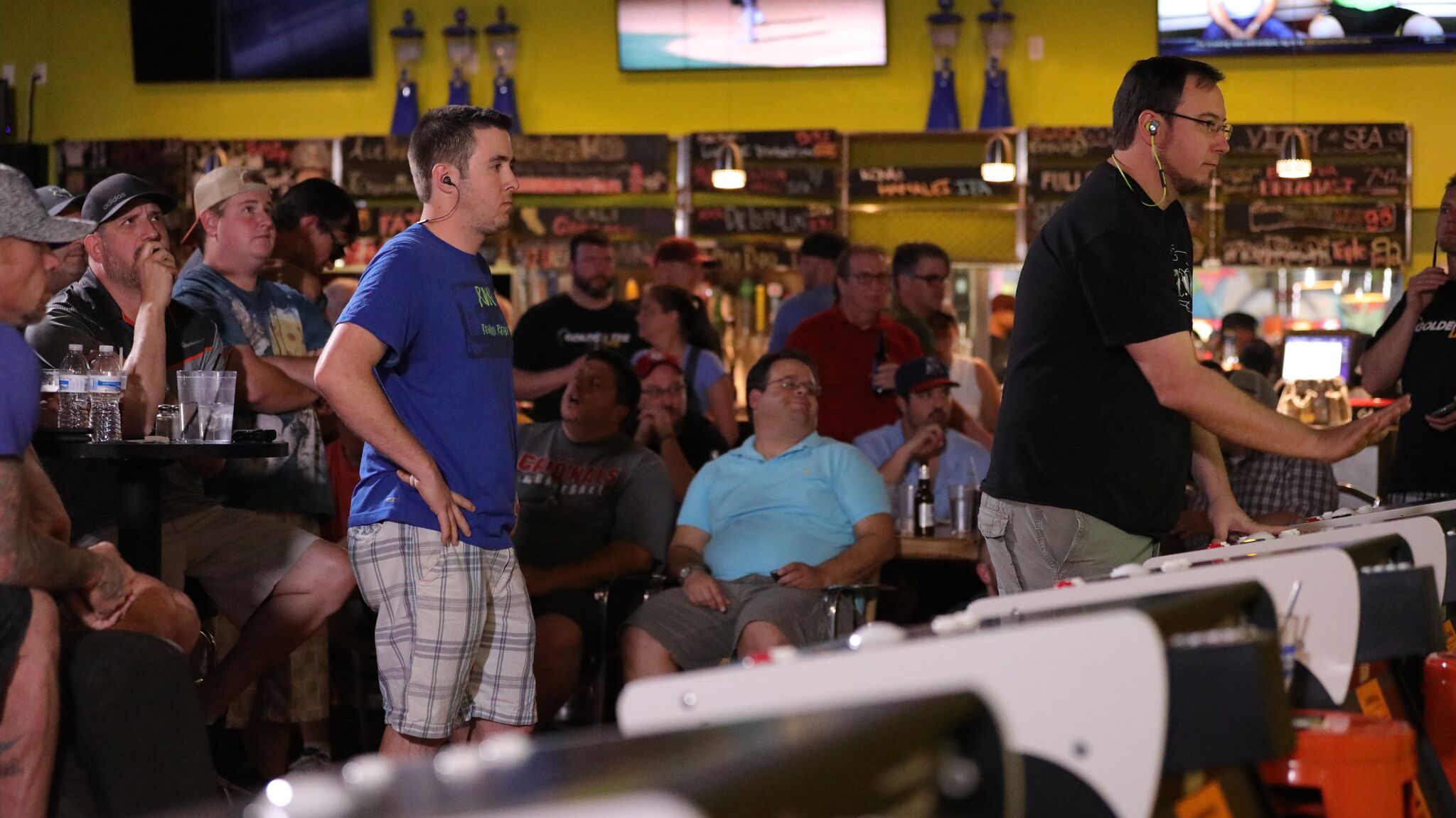 With a spot in the finals taken, the other side of the bracket played out. Illinois golfer Brian Bernhardt and Paul Tayloe each fired off long, successful runs after dropping early games.

Bernhardt, meanwhile, took out giant after giant himself to set up a match with Taylor to stay alive. Ultimately Tayloe edged Bernhardt in extra holes. For his spectacular efforts, Bernzie took home fourth.

With a chance at redemption with a win, Massara then took on Tayloe with a trip to the finals on the line. Ultimately Massara cut down his opponent -28 to -27—one of many tight games on the day.

And so the stage was set for yet another match between Stenmark and Massara with the $10,000 top prize on the line. To come away victorious, however, Massara would have to beat Stenmark twice.

He brought himself one step closer with a -26 to -24 win in game one on Ruby Rock, setting up a winner-take-all moment for the two finalists. They spun Juniper Falls, and off Stenmark went.

His -29 bested Massara’s -27, giving him the last great tournament trophy missing from his case. (You can watch both finals games below.)

“It’s the pinnacle of my Golden Tee career,” Stenmark said after. “I honestly thought last year would have been my best chance. Now to have my face in the game, it’s just unbelievable. This field was as strong as ever.”

For his efforts, Stenmark won $10,000. He’ll also be a playable character in Golden Tee 2018, create his own purchase-able “Champions” club set and create a Freaky Friday over the next few months.

Massara, who had a brilliant run, took home $5,000 for his fine showing.

Special thanks must go out to Hi Scores for playing host along with Steve Sobel and Russ Layton of Power Vending for running the event. Thank you to Richard King of Golden Tee TV for capturing the weekend through the stream. We’ll have more images and video to come in the days and weeks ahead.

And thank you—all of you—whether you watched or participated. An exciting tournament loaded with upsets only helped remind us why we love this game so much: for its brilliance, for its unlikely nature and for its camaraderie, all of which was on display this past weekend in Las Vegas.