NEWS
Let’s Golf For Halee
Indiana Golden Tee players come together for one of their own
http://twitter.com/share
Prev News | Next News 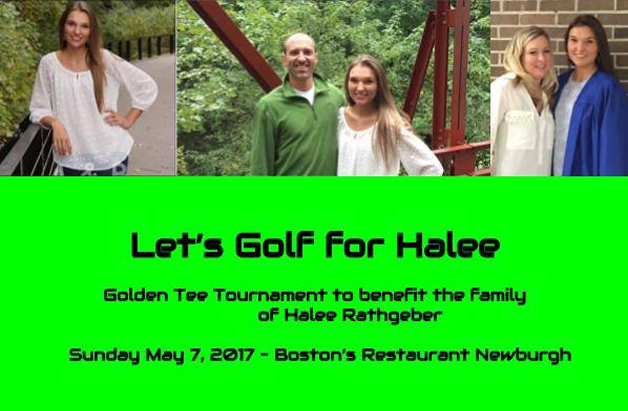 On April 24, the life of 20 year old Halee Rathgeber was tragically taken. Halee is the daughter of Tharon Rathgeber and Heather Collins. Heather is the girlfriend of Indiana Golden Tee player Marty Fisher.

The tragedy of Halee’s death affected not only her entire family, but also their friends across Indiana and beyond.

Golden Tee player Michael Cannon decided that a benefit tournament would be the best way that the local players could help the family in their time of need.  As Halee’s mother Heather said on Facebook, “Halee and I always had a good laugh talking about this golf thing!”

On top of the Golden Tee tournament, a silent auction was also organized, with over 65 items up for grabs. An ultimate pizza raffle with 36 different gift certificates was just one of the many items that topped the auction.

Twenty four players of every skill level showed up at Boston’s in Evansville on Sunday, May 7th. After 8 hours of grueling battles on the greens, Tom Hastetter defeated Kirk Woehlke to go undefeated in the tournament.

At the end of the day, every player decided to donate their prize winnings back to the family in honor of Halee.

Speaking about the event, Michael told us that “this benefit tournament is just one of the many examples of how a video game like Golden Tee has brought people together from across the world as one giant family. We are always looking out for each other.”

A special thanks to operator BJ Novelty for not only making a donation, but also making sure all four GT machines were prepped and ready to go for the tournament.

On behalf of the entire Incredible Technologies family, our thoughts and prayers are with Marty, Heather, Tharon and all of Halee’s family and friends.

If you would like to make a donation in honor of Halee, you may do so by heading to the memorial page on GoFundMe.