NEWS
A Front Nine For the Ages
19 after Only 9 holes? Oh yes, that Happened
http://twitter.com/share
Prev News | Next News

If there is such a thing as a disappointing -30 in Golden Tee, Houston’s Mark Stenmark might have just accomplished such a feat on Coconut Beach.

Of course, finishing with a -30 on 18 holes of virtual golf is something passionate players of the game dream about, an accomplishment that stands alone and requires no backstory to explain its value. But in the instance of this particular game, -30 isn’t what stands out. 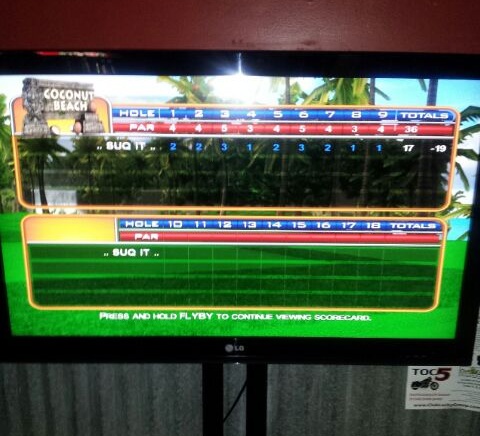 The front included three—yes, three—holes-in-one, including aces on holes 8 and 9, and blue numbers across the board. The blue signifies an eagle or better, of course, and this image is still kind of difficult to process.

Stenmark ended up firing a -11 on the back, which included a bogey on the 15th hole. It’s rare where you can bogey a hole and still fire off the elusive -30, although a -19 on the front (which is still somewhat hard to type, like it has to be a mistake) will provide ample cushion on the back.

Here's the hole-by-hole for the entire round.

-19 after 9 has been done before believe it or not; although it’s been a while since a front nine like this has surfaced. Most of us would be more than content with a -19 after 18 holes.

Congratulations to Stenmark on the game, and more specifically, a magnificent stretch of holes.