NEWS
GT 2013: Hands on With Coconut Beach
Leave the Beach Towel at Home, Let’s Take a Walk on the Wild Side
http://twitter.com/share
Prev News | Next News

The sight of baby blue water is a welcomed one, even if it’s on a television screen.

In the heart of winter, tucked deep in the back of your favorite watering hole, this majestic hazard is magnificent to look at… from a distance, of course.

Most of the time the presence of this liquid gold means just that, but not in 2013. The sailboats have been replaced with thick, dense trees. The beach chairs are nowhere to be found. The resort-like feel is gone and a dense jungle has been put in its place. As good as the course looks – and it looks really damn good – this isn’t Golden Tee paradise.

Coconut Beach is rugged, it is fantastic, and it coming to that same back corner you know so well. 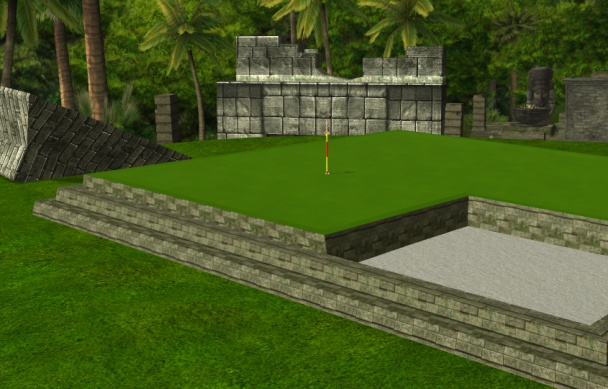 It lines the fairways, surrounds the greens and can be found just about everywhere (or at least nearby) of where you’ll want to be. The ancient ruins left behind stone surfaces that can adjust your strategy plenty.

First, of course, is when you happen to hit this area before finding the green. It will take just about all spin off your shot, which could mean trouble if there is a hazard nearby. Regardless, distance control will be crucial, and missing both long and short could result in something much worse than a chip for birdie.

On top of the stones, various holes have steps (as seen above) that can serve as an even bigger penalty. Coming up short could send your ball sailing backwards or you could be caught directly under the step above.

And Let’s Not Forget About the Ruins 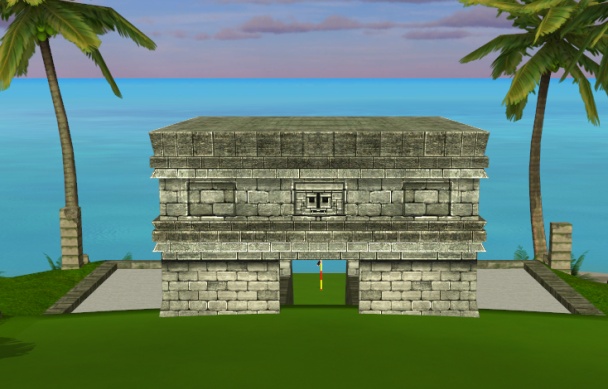 The surfaces that surround the greens and fairways are one thing, but Coconut has much, much more in terms of ruins-related items.

The drivable par-4s and par-5s are absolutely jam-packed with obstacles from the past that are directly in your path. You’ll hit around, over, under (yes, under, see: above) these structures which vary in size and impact. SPOILER ALERT: Golden Tees will be your friend on this course and be ready to use them when necessary.

Some winds, pins and setups will make you think twice about trying these shots, because it’s not the obstructions that you really have to worry about – it’s that majestic blue water we talked about at the start. That’ll be where strokes are really won and lost.

The Most Intriguing Design-a-Hole Yet 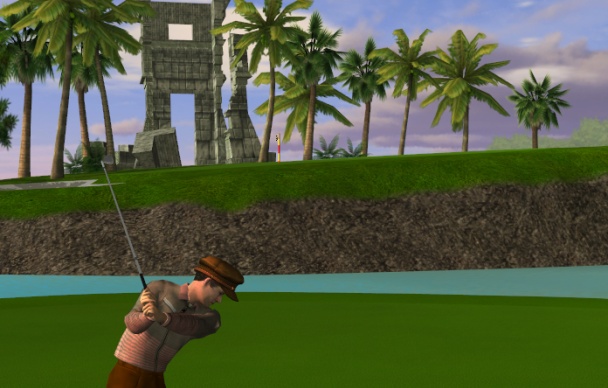 If you asked Golden Tee players what their favorite term is –other than “FREE BEER” – they would all likely give a very similar answer.

Yes, Coconut Beach does indeed have a drivable par-5 and that comes courtesy of this year’s Design-a-Hole winner. The Ancient Ruins went from concept to creation and is now the 11th holes on this design. It’s not reachable from every tee box, but it can be done. Oh, the YouTubes will be glorious.

When it’s not reachable, you’ll have to earn your eagle. The passageway through the hole is surrounded by rock walls, and having a clear shot to the green will require a perfect drive that avoids the rock walls.

It’s a fun hole, a brilliant design and a chance to pick up some serious strokes if the setup is right.

We'll break down the other courses soon enough. Stay tuned to Goldentee.com for more!