NEWS
Significant Drops
In Golden Tee 2012, Staying Safe Off The Tee is More Important Than Ever Before
http://twitter.com/share
Prev News | Next News 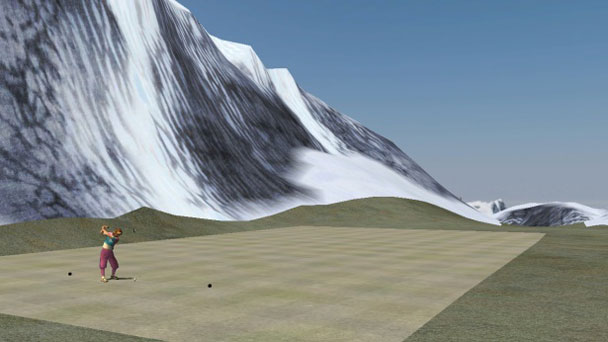 It’s a phrase we throw around quite a bit on Goldentee.com when it comes to the game and deciding when you should risk your round by going for the gusto off the tee. In Golden Tee 2012, this great debate before hand meets trackball will now be more important than ever before thanks to revised drops that will make their GT debut.

Drivable par-4s will be the holes impacted by the change in 2012, although there’s also a drivable par-5 (SPOILER ALERT) that will get this treatment as well. If your tee shot happens to find the hazard or end up out of bounds, you’ll no longer be placed near or next to the green. In fact, you’ll be dropped right near where you teed off – much like the stroke and distance rule in regular golf – making par a more challenging score to come by.

“The risk versus reward shots are what make playing the game both challenging and fun,” said course designer Jim Zielinski.” In the past few years I feel that these shots have changed quite a bit because players could end up in the hazard or OB and get a very favorable drop near the green because the penalty wasn’t severe enough. This year that won’t be the case.”

Make no mistake about it; this will certainly change the way you approach challenging holes or difficult setups. The new drops will also be incredibly important and match play games and contests will be decided on if you take the risk, and more importantly, if you avoid trouble.

“I want the players to be thinking about each shot and how this could impact not just this particular hole but the round in general,” Zielinski commented. “This won’t change the game, but might change your approach with harsher punishments for errant shots in place.”

Needless to say, this minor change could impact the game in a big way.

“Although the punishment has increased in some ways, that doesn’t mean you still can’t be aggressive,” Jim added. “Instead of going for the pin, however, you might be better off ensuring that your misses are safe misses. Bunkers aren’t necessarily a bad thing and staying dry and in play will be more crucial than ever.”

We’ll have plenty more on Golden Tee 2012 in the coming weeks leading up to launch. Stay tuned for much more!