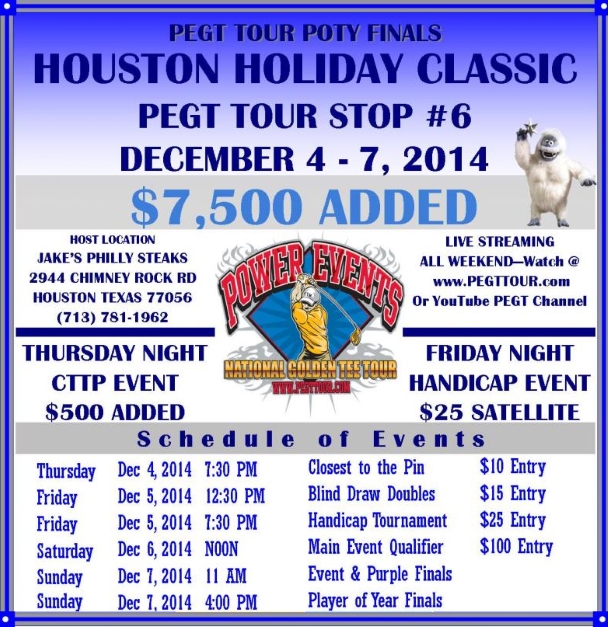 The end of the Golden Tee tournament season is near. But before we can flip our calendars to a fresh slate of trackball stops, there’s still a tournament crown to be decided. Well, two, actually.

Power Events’ Houston Holiday Classic offers the ultimate bang for your buck: two tournaments, one weekend and a whole lot of other reasons to attend.

This year’s event will take place on Thursday, December 4 through Sunday, December 7 at Jake’s Philly Steaks in, you guessed it, Houston. It will open that Thursday with a Closest to the Pin event and continue on Friday with a blind draw doubles and a handicap event that evening.

On Saturday Main Event 1.0 will get underway with a five-course qualifier. Once this is complete, the top 32 players will be placed in a bracket and begin double-elimination match play later that evening.

The next day, match play will continue until a Houston Holiday Classic champion is crowned.

And it doesn’t stop there.

After a short break, the players will get right back to it. The players that finished the year with the most PEGT Points—a total that has been accumulating at each and every PEGT Tour stop—will be tossed into one final 32-man bracket.

Whether you’re gunning for a spot in the final 32 or simply looking to soak in one of the more action-packed weekends of Golden Tee, Houston is an absolute must. You’ll meet great people over drinks, all while enjoying your favorite game.

Interested in signing up? You can register now on PEGTtour.com. Walkups will be welcomed as well.

And even if you don’t want to compete, you’re encouraged to stop by Jake’s Philly Steaks for a beer or two. Or, if you stay for both tournaments, maybe a few more.