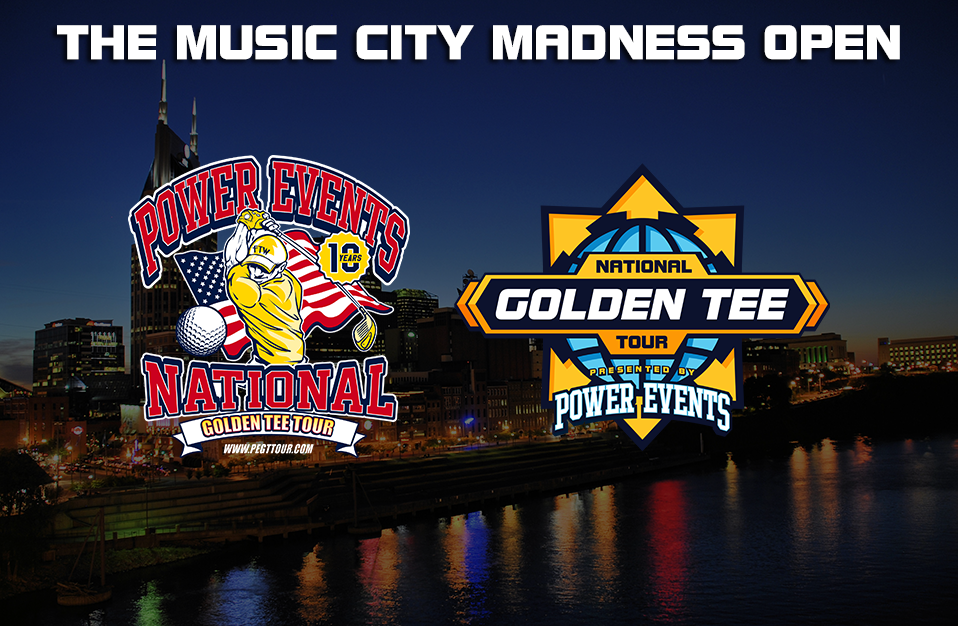 After another successful event in St. Louis this past June, the National Golden Tee Tour is taking its talents to the one and only Nashville, Tennessee for the first time ever!

The Music City Madness Open takes place at TNT Billiards Bar and Grill on August 19th through the 22nd for another exciting weekend of GT tournament action!

$6,100 is added to the prize pool and there are nearly 160 players of all skill levels already signed up!  If you have yet to do so, you can sign up at Power Events website!

The Music City Madness Open will run just like the majority of the other National Golden Tee Tournaments. On Thursday, August 19th, starting at 7:30PM we will have the Closest To The Pin (CTTP) and Money Shot tournaments. Each one costs $10 to enter and are double elimination. Friday will get us into 18 hole play with the Handicap Tournament starting at 7:30PM with a $25 entry fee.

Saturday is always the busiest day with the player auction beginning at 11AM with the 5-course qualifier starting immediately after! This will determine who will play in the Main (32 players), Purple (64 players), and Pink (remaining players) brackets. After the qualifier finishes, the Doubles Tournament will begin. There will be a blind draw of teams based on your handicap. This is great for new players with low handicaps to play with higher skilled players and hopefully learn a thing or two!

On Sunday, the venue will be at its most tense because everyone is concentrating on making a deep bracket run! Purple and Pink bracket play begins at 11AM sharp with Main bracket beginning at 12PM. We will crown a Main, Purple, and Pink bracket winner Sunday night!

On top of all of the Golden Tee Arcade action going on all weekend long, we will also be having our second national Golden Tee Mobile tournament!  Whether you've been playing GT Mobile since it came out nearly two years ago or just started playing after watching its first-ever World Championship event that took place in Las Vegas last month, the Mobile tournament is the place to grow and hone your skills!  In partnership between PEGT, IT and the GT Mobile League group, you can sign up for the tournament here!

If you can't be at the Music City Madness Open, we've got you covered! Live stream all of the action on our YouTube, Facebook and Twitch pages. We will have multiple games simultaneously streamed with great and in-depth commentary! This is an amazing way to learn from the pros about certain shots, strategy, and more. Take advantage of this by asking them questions during the live streams!

There will be a ton of Golden Tee players at the Music City Madness Open.  There is over $6,000 added to the prize pool that weekend. You can sign up here. We hope to see you there in person or have you tuned in to our live stream!