NEWS
Ship It, Chip It
Just Your Run-of-the-Mill 3-Wood Chip Ace to Close a Round
http://twitter.com/share
Prev News | Next News 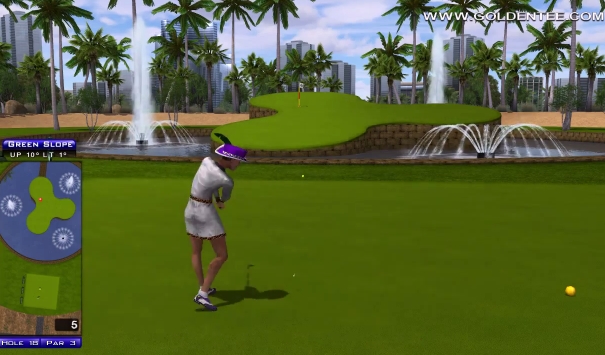 My first hole-in-one ever in Golden Tee came on Hole 18 of Palm Springs. It was a terrible shot destined for the water thanks to untimely backspin usage, but the pin just so happened to get in the way. The result was a new personal best and a young man screaming in excitement at an arcade game as a group of confused bar patrons looked on.

That, to this day, is the most excited I have ever been to close out a round. There have been other finale aces, but none quite as exciting as this.

You likely know this feeling—where you are able to leave your putter in the bag as the game ends. It is the ultimate way to end a round, and it happens to fast you really don’t have much time to process.

In all likelihood, however, you have never closed out a round with a hole-in-one to give you a -31. More specifically, this -31 probably didn’t come as a result of using a 3-wood to chip in over water on a short, fascinating par-3.

You know where we’re going with this, yes?

That’s where Andy Haas comes in. The Ohio native and former Golden Tee World Champion did just that on Desert Valley Resort.

It’s unorthodox, unusual, difficult, and also remarkably successful. Here’s the part where I tell you to not try this at home even thought I totally want you to try this at home.