NEWS
A Round For The Ages
Golden Tee World Champion Andy Haas Fires Off an All-Time on Shady Acres
http://twitter.com/share
Prev News | Next News 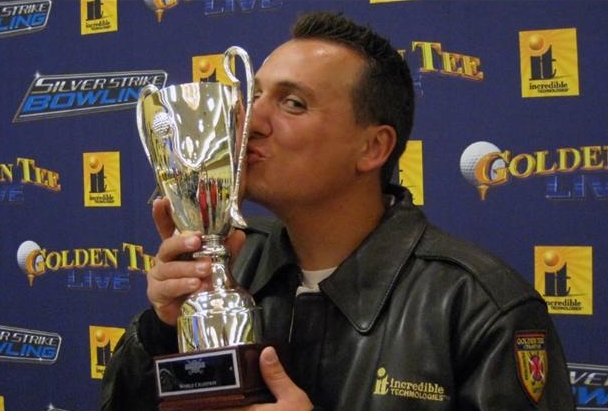 “Best ever” is a term that will apply plenty with the words and images below, so you might as well get used to it.

There’s Ohio Golden Tee pro Andy Haas, arguably the best ever to play the game. There is competition in this unsolvable discussion, so we’ll by no means narrow it down. But it’s obvious he belongs right in the thick of things. The image above, for example, features Haas at the last Golden Tee World Championship.

If you didn’t figure it out with the lovely trophy shot, he came away victorious.

For one of the game’s best ever, there are relative moments of greatness that even he can identify as being unique. His average round is one most players—raises hand through ceiling—would kill for. His great rounds, the truly historic 18-hole sessions, can be difficult to comprehend.

We’ll do our best to try.

In a recent Prize Play contest, Haas fired a -31 on Shady Acres. There have been bigger scores overall this year—including a handful of -32s on Pelican Grove and Highland Links—although this particular game on the hardest course in the current installment is one of the best rounds Golden Tee has ever seen.

Shady Acres can be challenging, especially on tougher setups. The par-3s are tricky, the back nine is taxing and the final few holes can unravel a lot of godo very quickly. It didn’t this time, though.

The hole-by-hole, which is featured on the right, provides a blueprint of how this all came together.

From there, Haas nailed a double eagle on Hole 12—one of the trickiest par-5s in all of 2014—and followed this up with an ace on the next hole, a par-3 that has burned plenty in the past. He just barely missed a 60-foot eagle chip on Hole 14, so he had to settle for birdie. Yes, it was that kind of round.

The remaining four holes featured no landmine encounters, just a few more Great Shot Points on the par-5 16th. He navigated Hole 17, hit the green on Hole 18 and drained a 60-foot eagle putt to close out the round.

Here’s Haas on this game and where it stands next to some of his all-time great rounds.

“The -33 on Monument comes to mind because Hole 18 was next to impossible. I had four holeouts in that game,” Haas said. “The -33 on Heather Pointe had three holeouts, but Holes 15 and 18 were nasty and I aced 17, which might be the hardest hole ever.

“Given that Shady is definitely this year’s toughest course and it was a true five-holeout game, it’s hard to argue that this wasn’t my best round ever.”

Regardless where it stands in his robust catalog, or where Andy Haas stands in the conversation of all-time Golden Tee greats, this is a round that will live on for some time. 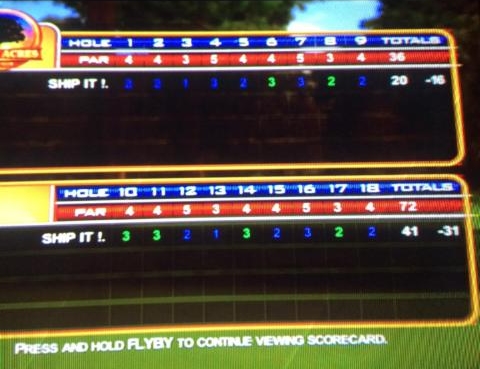