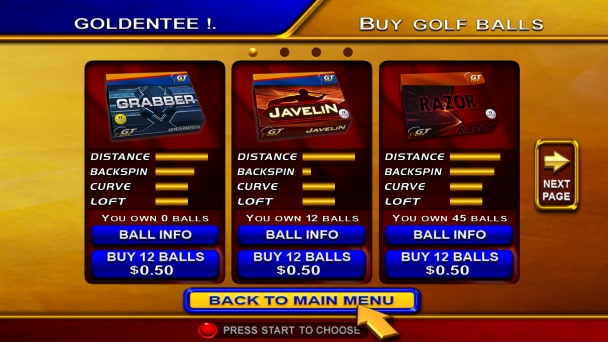 You’ve seen the new clubs in Golden Tee 2015; now you’ll get a glimpse of what these clubs will be hitting close to the pin.

Two new clubs will make their debuts in 2015, and they will each cover two desired traits in Golden Tee: Distance and spin.

You want to hit the ball far. Driving it further than your friend on Hole 1 is one of life’s most meaningless pleasures. Does it matter that he’s only two yards behind you? No, not really. But he’s behind you, and you should really let him hear about it.

Spin, while maybe not as sexy, is perhaps even more important. Getting your ball to move forward and backward toward the hole is how those special moments are made. It’s also crucial in sticking difficult greens and avoiding trouble.

You know all of this. You just didn’t know what balls would be available in 2015. Until now.

It will land soft, and it will be spin. That’s a wonderful combination for those of you who play with controlled aggression, which is encouraged in Golden Tee. Grabber golf balls will grab, hold and send you in the direction you would like to be rolling.

From controlled spin to controlled distance, the name here says it all. Javelin balls will travel far—really far—but also land soft enough to keep more balls in play. You sacrifice some spin by playing them, but the added distance off the tee will give you more opportunities to attack pins with lofted clubs.