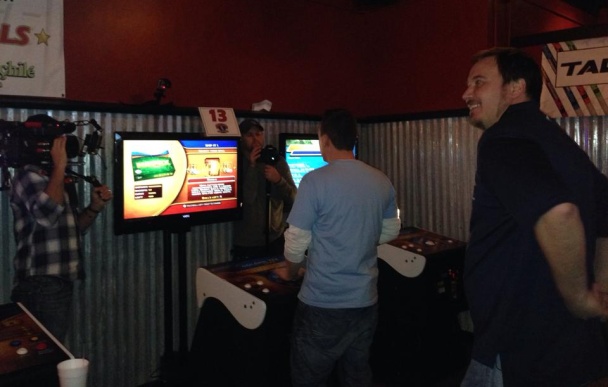 The Golden Tee tournament season is officially closed for business.

Before the doors shut, however, it ended with a flurry of excitement, a cameo from the Golf Channel to capture the madness, a run of superb matches and two outstanding champions.

Power Events’ Houston Holiday Classic—played at Jake's Philly Steak—served two purposes. First, to crown a champion in the final circuit event of the year that took place at locations around the country. Next, it was on to the Player of the Year tournament, one last 32-man bracket featuring the standouts from the previous events.

Needless to say, both lived up to expectations.

The Houston Holiday Classic began with a five-course qualifier, and the scores were off the charts. 83 golfers participated in this event, and it was Houston’s own Mark Stenmark finishing with top qualifying honors. Stenmark’s score of -134 was headlined by an unthinkable -31 on Pelican Grove.

With the bracket set, it was a familiar face that ended up on top. After losing to Illinois trackballer Jeff Lannen in the king of the hill match, Haas won his way back into the championship with a thrilling victory over Texas golfer Ed Godfrey.

Typically the normal tournament weekends would end here. Not this one, though.

After a brief timeout, the 32 players with the most PEGT Points accumulated throughout the year were placed in a final double-elimination bracket. The winner would take home a solid cash prize and the Player of the Year title.

As you might have expected, some familiar faces again made noise.

A similar path to his first run of the weekend, Haas lost to Mark Stenmark and was sent to the loser’s side of the bracket. After winning a few matches, however, he played his back into the finals where he took on Mark Stenmark, the top overall qualifier.

The Golden Tee featured between these two was outstanding. And after a long marathon session—one with plenty of extra holes—it was Stenmark prevailing. These two have played in plenty of fascinating matches before, although this was one of the best stretches of Golden Tee you will ever see.

Congratulations to both Haas and Stenmark on their tournament wins, and thank you to everyone who attended the event.

Special thanks must go out to Power Events for this weekend and another wonderful year of hosting Golden Tee tournaments. For more information on the PEGT Tour visit PEGTtour.com.