The Sterling Heights, Michigan native works part-time at an arcade and pinball refurbishing shop, and he’s even assembled his own game using vintage GT hardware from 1999. From World Class Bowling, to Shuffle Shot, to the more current PowerPutt, Faustich loves them all. But he especially loves Golden Tee.

Faustich averages around 11-under, and he’s been playing for more than five years. With his Design-a-Hole victory, however, Faustich will be more than a fanatic of his favorite game. He’ll be a course designer. 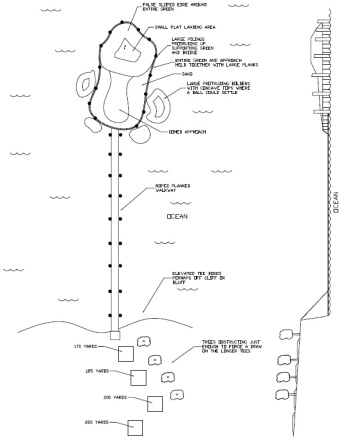 His creative par-3, Island Green, will be featured prominently in Golden Tee 2014.

It started from an idea. Well, two, actually. And Faustich submitted them into the year’s Design-a-Hole Contest.

Island Green immediately caught the attention of our Golden Tee judges and was named one of ten finalists. After narrowing it down to five, our judges picked this par-3—the first par-3 to ever win—as a worthy champion.

“I’m so excited I’m shaking,” Faustich said when he first learned he had won. “Awesome, absolutely awesome, although I'm still not sure if it's sunk in yet.”

Jim Zielinski, DAH judge and GT course designer, outlined why drawing up a unique par-3 can be a challenge. There are limitations on what can be done, and crafting something unique with a rather short distance ceiling can be difficult.

Using his experience in CAD programs (about 40 years of experience!), Faustich created a par-3 he thought would fit into the game. At first, however, he wasn’t going to go this route.

“I was going to do a par-4 and then I decided that there probably aren't many Par-3 submissions,” he noted. “I actually drew the entire hole to scale in AutoCAD to see if it looked like it was feasible. After some tweaking it looked like it would be pretty cool, so I sent it in.”

The result is a hole that might seem similar, at least to those of you who enjoy golf outside the bar. As a fan of both real golf and Golden Tee, Faustich combined his passion for both to create a fair, creative and challenging design.

“I'm an avid real world golfer and I also enjoy watching the pros on the weekends,” Faustich noted. “I guess some inspiration probably comes from the TPC at Sawgrass and watching the pro's struggle with Hole 17 every year at the Player's Championship.”

Island Green will serve as the first par-3 in the game that has not been designed by Jim Zielinski. And while the process of converting it hasn’t gotten underway just yet, it will begin its transformation shortly.

The roped walkway will make this hard to miss in Golden Tee 2014, as will the massive sign claiming this creation as his. The surrounding water and shapely green, however, will be what makes this design a staple in the next update.

We’ll have much more on Island Green once it goes from concept to creation. Stay tuned for much more on this year’s Design-a-Hole winner as well as Golden Tee 2014.