Although the 2014 Design-a-Hole Contest has come to a close, the fun has only just begun.

From 100, to 10, to five and now to one, the Golden Tee judges have decided on this year’s winner.

“It’s been a pleasure seeing what the fans of Golden Tee came up with once again, and they did not disappoint,” said course designer and GT judge Jim Zielinski. “It’s gotten increasingly more difficult to narrow down a group of worthy finalists, although we’re very happy with this year’s selection.”

And that selection is “Island Green” by Gordon Faustich. 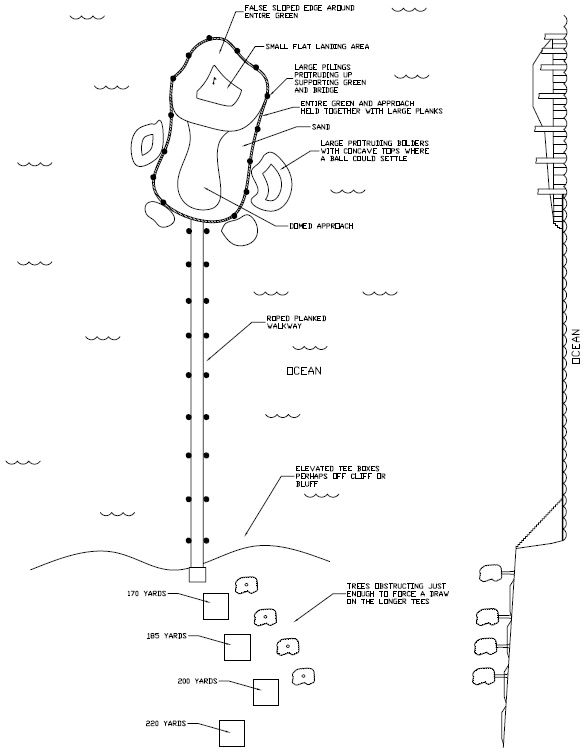 "Island Green" edged out “Declining Options” by Andy Hamilton, which placed second, and “Mind the Gap” by Michael Ryan, which came in third.

Jim Zielinski explains how the judges reached their decision.

Once we zeroed in our top three, we look long and hard at how Declining Options and Mind the Gap would make that Golden Tee transition. Although the designs were outstanding, some of the shots and elevation changes in each were a concern, and necessary changes would've likely taken away from the originally and enjoyment of the hole. Believe me, this is a process I know all too well.

What we really loved about Island Green is that the changes are minimal. Truly, there isn’t much we’ll have to do to make this design Golden Tee ready. In fact, out of all the winners we’ve had in recent years, this design will likely require the least amount of alterations.

More so than that, creating a truly unique par-3 is a challenge. There are only so many things you can change, and originality with distance limits can be tough to generate. We believe Gordon was able to do that with his design, and we also believe it will fit in brilliantly on one of the 2014 courses.

Congratulations to him, and thank you to everyone who submitted a design. Your creativity and passion for the game is both obvious and appreciated.

Island Green will immediately go from concept to creation, and Jim Zielinski will begin the transformation in Golden Tee 2014. We’ll talk to Jim (and get plenty of images) once this process is underway, and we’ll also talk to Gordon about his inspiration.

Echoing what Jim already said, thank you to everyone who submitted, commented, and played a role in this year’s contest. Your participation is integral in the success of this contest, which is why we’ve been able to run it for this long.

We’ll have much more on Island Green—and of, course, Golden Tee 2014—soon enough. Stay tuned to Goldentee.com for much more.