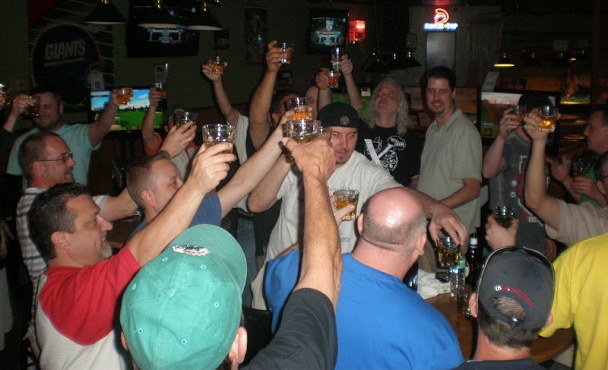 Golden Tee’s first tournament of 2013 has come and gone, and Power Events’ Golden Tee Tour kicked off the season in fantastic fashion.

One of six PEGT Tour stops over the course of the year, the Florida Open brought on good weather and even better GT. Backstage Billiards played host to the event, and 56 players teed it up with their eyes on the prize.

To determine the main bracket, a five-course qualifier was held on the Golden Tee 2013 courses. Houston’s Mark Stenmark and Missouri golfer Evan Gossett finished tops in the qualifying with overall scores of -125, a theme throughout the tournament.

For Stenmark and Gossett, this was only the beginning of close calls.

Double-elimination match play began, and both cruised early. They ended up meeting up in the king of the hill game, and the winner would head to the finals. The loser would have to play his way back in, but wouldn’t be knocked out.

In one of the best matches of the tournament, the two went to sudden death after each firing a -26 on Bear Lodge. After a few close calls on the front, Stenmark found the water on the ninth hole and Gossett prevailed. As you might expect, however, these two were far from done.

While matches played out, Stenmark waited for his opponent and he got a tough one. Florida native and former Golden Tee world champion, Chris Eversole, knocked out fellow Floridian, Sean Gervais, to stay alive, and this set up a matchup between two greats.

It was Stenmark prevailing in this one, ever so slightly, and he edged Eversole -25 to -24 on Jack Rabbit Junction to move into the finals.

This meant that it was Stenmark vs. Gossett: Round Two. If Evan won, the tournament was over. If Mark prevailed, they would have one more match to decide a champion.

Playing on Jack Rabbit Junction, the two went into sudden death again (surprise, surprise), but this time it was Mark getting the edge on the ninth hole. The win set up one final tournament match with the title on the line.

The final game, played on Cape Haven, didn’t go to extras. Despite Gossett’s supreme play, Stenmark fired off a -28 in the final match to take home the Florida Open title. In the loss, Evan still fired a ridiculous -26, it simply wasn’t enough.

What a show put on from these two, neck-and-neck from start to finish.

Congratulations to Mark Stenmark on the win and thanks to everyone that made the trip to Orlando for another wonderful weekend thanks to Power Events.

The tour is just getting underway, and St. Louis will be the next PEGT Tour event come April. We’ll have much more on this soon enough, and be sure to check out PEGTtour.com for updates.