Golden Tee’s most historic tournament lived up its billing once again. As if we had any doubts.

The NIV X took place at Baja Bean in Richmond this past weekend, and some of the game’s finest wasted little time getting acclimated to Golden Tee 2013. This was also a PEGT Tour event, and the final one before the finale in Dallas meaning the stakes were high.

With the updates installed only a few days prior and the courses still very fresh, 55 players signed up to compete in the first tournament played on Golden Tee 2013.

The event kicked off with a 5-course qualifier, and the scores were better than expected, at least at the very top. Houston’s Mark Stenmark fired off a -122 to take top qualifying honors while Ohio’s Andy Haas was right behind with a 5-course score of -121.

With the field set, bracket play began and a familiar figure returned to his dominating ways.

Florida’s Chris Eversole is a former Golden Tee champ who also happens to have his head in the game. And while he hasn’t been a tournament presence in some more recent events, one thing clearly hasn’t changed.

The guy really knows how to play Golden Tee.

Eversole cruised through the main bracket, prevailing in some closer matches against some of the game’s best. He then took out his buddy Graig Kinzler—another world champion—in the king of the hill match to work his way into the finals.

Despite losing very early on, top qualifier Mark Stenmark responded in a big way. He bounced back on the loser’s side of the bracket (he also shot a -29 along the way) and played his way back into the finals against Eversole.

To win, Stenmark would have to take down Eversole in two consecutive games, although it wouldn’t get that far. Playing on Sequoia Grove, Eversole edged out Stenmark -23 to -22 to stay unbeaten and win the NIV X.

It seems fitting that one of the game’s most storied players would prevail in one of the more historic events yet again. Thanks to everyone that came out to Baja Bean, and also special thanks to Power Events as well as Jeje Allums for putting on a fantastic event.

We’ll feature some of the best matches of the weekend on the site soon enough on Goldentee.com and provide all the details you need regarding the final monster PEGT Tour event in Dallas. 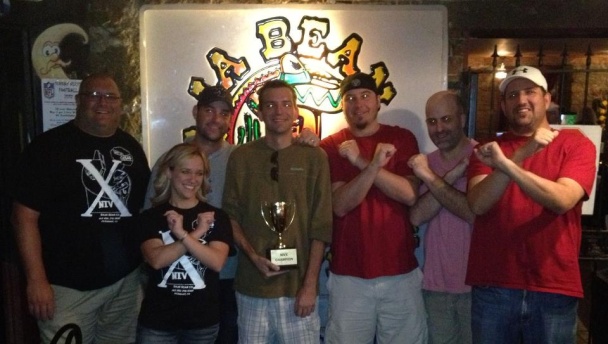