NEWS
Drew Brees Vs. Bubba Watson – Who Ya Got?
The Two Mega-Stars Take to Twitter, and We Handicap a Potential GT Match
http://twitter.com/share
Prev News | Next News

One is a professional golfer than can hit a small white object cartoon-ish distances, the other is an MVP QB that could absolutely destroy you in a front-yard, tire-throwin’ contest. Bubba Watson has a green jacket; Drew Brees has a Super Bowl ring.

Impressive indeed, but a really important question remains: Who would dominate in a game of Golden Tee?

This topic surfaced on Twitter of all places when GT’s good buddy Bubba Watson posted a photo of a Golden Tee game before he was set to tee off. Drew Brees caught wind of this tweet and responded accordingly, representing his GT game well. 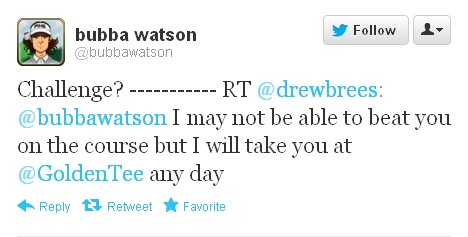 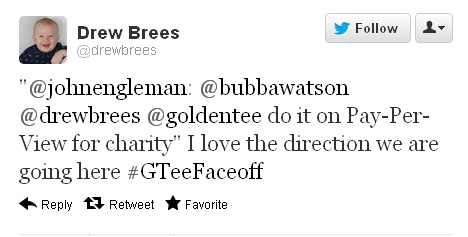 Oh, good ol’ fashion Twitter trash talk surrounding Golden Tee is always welcomed, especially if a charity could benefit, and now we need to make this thing actually happen. We’ll work on that.

As for the match itself, well, we’ve gone ahead and handicapped the strengths and weaknesses of each opponent if they happened to meet up. Just in case.

Pros: LONG off the tee and a very crafty wedge game. You saw what he did with a real golf club, just image what kind of directional manipulation he could do with a golf ball. Very creative with his shot-making, which could impact his GT game a great deal.

Cons: No lefty golfer in the game, which could be a difficult adjustment for someone that makes his living off the golf swing. Also, how will a lack of a pink driver impact his game? The real-life to GT translation is a bit of a worry.

Pros: Accurate as hell and flexible in unique situations. If his virtual golf game is anything like his pocket presence, he’ll be able to beat his opponents in a variety of ways. Also, for a smaller QB frame, he can hit the ball a LONG way. Maybe not Bubba long, but just look at that deep ball. Pressure player, too.

Cons: Although he’s no slouch on the real links (currently sporting around a 3 handicap), the overall game and course awareness here is a bit of a concern, especially compared to his opponent. Also, Brees’ record inside a dome is off the charts. Golden Tee… NOT being played in a dome just yet.