NEWS
Behind the Design: The Ancient Ruins
From Start to Finish, Hear How Jason Thomason Came up With Golden Tee Gold
http://twitter.com/share
Prev News | Next News

Georgia native Jason Thomason thought long and hard about not submitting a hole into the 2013 Design-a-Hole Contest. He had tried before, been recognized before, but came up just short in the past. In the end, however, he decided to give it another shot and submitted two designs into this year’s contest.

“The competition is always so tough, but I was confident that my designs at least had a chance once I submitted the final versions,” Jason said. “Early on I had PC troubles and I wasn’t as interested, but that changed when the idea for The Ancient Ruins popped into my head.” 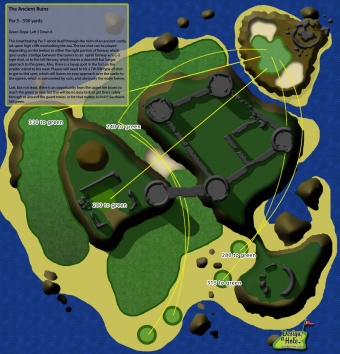 And we’re certainly glad it did. The Ancient Ruins was one of more than hundred submissions into this year’s contest, and it got past the first screening and made the group of ten finalists. After feedback from fans and an extensive sessions under the Golden Tee microscope, the Design-a-Hole Selection Committee (and yes, there is such a thing) picked The Ancient Ruins as the 2013 champion.

Interestingly enough, however, is the fact that The Ancient Ruins wasn’t always The Ancient Ruins. Jason submitted an initial design with a similar hole-makeup that had a St. Patrick’s Day feel, equipped with a shamrock green. While still excellent, it was not the fascinating creation that won him the contest. And although he used this foundation to create his winning masterpiece, he made some massive changes along the way.

“Later on, I made the hole drivable in certain setups, which I felt created a much better overall design,” Thomason noted. “And then I switched the setting. I love the castle ruins that can come into play and the fact that it includes all of the elements. Once I did that, I had much more confidence in the submission.”

He wasn’t the only one. The Golden Tee team that had the tough task of picking a winner in a field loaded with worthy designs immediately liked the depth of Jason’s design. The sheer beauty of his work – which is not a requirement in the contest by any means – was also hard to ignore.

“He has such a beautiful and simple design style in both his artwork and his hole layout,” said Golden Tee course designer Jim Zielinski. “It's a challenge to be creative, realistic and take the fundamentals of Golden Tee into consideration. Jason was able to do just that."

The Ancient Ruins will now be transformed into a playable hole in Golden Tee 2013, a process that is much more complex than simply copy and pasting. Elevation and overall playability is something that needs to be tried and tweaked, and managing distances is no easy task. Jim Zielinski knows how difficult this can be, even with a fantastic blueprint.

“We’ll have to make slight adjustments and tweaks to have The Ancient Ruins adapt to the game, but we think this design will fit in wonderfully on one of the 2013 courses when it’s all said and done,” Zielinski noted. “I think everyone loves playing drivable par-5s, and now you know you’re guaranteed to have at least one come fall.”

As for Jason Thomason, well, the reward stretches well beyond having his dream design in his favorite game. With the win, Jason will also take home his own Golden Tee Home Edition and will be able to play his hole in his house on his very own Golden Tee game.

“It’s a dream come true and an honor given how good some of the designs were in this year’s contest. Truly, all finalists were deserving,” Jason said. “I’m very excited to play this game with my friends and family who have supported me, some of which seem almost more excited than I am. I just hope they don’t post a better score on my design than I do!"

We’ll have much more on Jason’s design once it begins its transformation process. Stay tuned to Goldentee.com for more.