NEWS
A Scorecard Worth Seeing
There’s Going Low, and Then There’s the GT-Like Score That Was Just Dropped on the Real Links
http://twitter.com/share
Prev News | Next News

Shooting a -16 in Golden Tee is an accomplishment. Think about it (and no, I’m not talking to you pros out there), this means you’ve basically birdied every single hole and avoided the dreaded blow-up disaster that sneaks its way into your round.

If you’re able to close with a -16 or better, you’ve obviously played a little GT in your day and likely know some of the ins and outs of the game. Now, what about a “real” game of golf – yes, Golden Tee is real, but you know what I mean – where someone shot sixteen under par?

Impossible, you say? Well, not quite.

Golfweek National Pro Tour player Rhein Gibson appears to have done just that, and he has the scorecard to prove it. He played a round at River Oaks Golf Club in Oklahoma and fired off a scramble-esque 55. He shot 29 on the front and a jaw-dropping 26 (!!!) on the back.

The picture of the scorecard made its way to CBS and will likely make your golf brain hurt by looking at it. 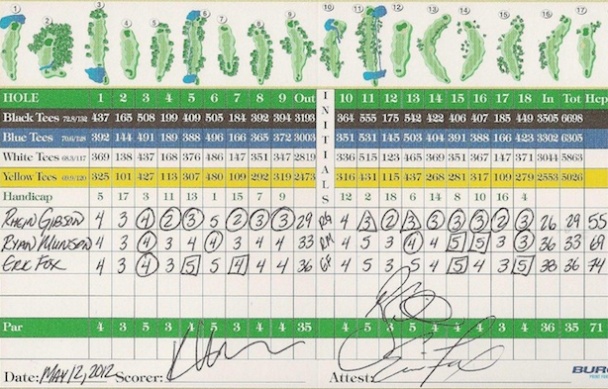 From all of us at Golden Tee, we salute you, Rhein Gibson. Although your ridiculous score has nothing to do with GT, it is a golf feat worth celebrating and most would be thrilled to sign their virtual scorecard accordingly.