NEWS
Renovated and Ready for Business
The 30 Under Club is Up and Running, and Tony Whingham Has Achieved PowerPutt Greatness
http://twitter.com/share
Prev News | Next News 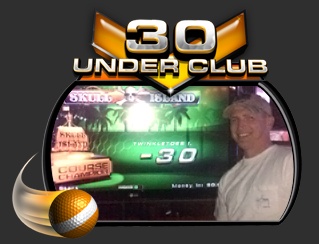 Shooting a -30 in PowerPutt is a task that once seemed insurmountable. When the original game launched in 2008, we were unsure about just how many individuals would hit this milestone.

The answer was eighteen, at least that’s how many players submitted their -30 or better and were included on the website.

With PowerPutt LIVE launched, new courses to be tamed and changes to the website, the new and improved 30 Under Club is live, and our first name has been added to the site.

Tony Whigham hit his 30 under while playing on Skull Island at Calloway’s Sports Bar in West Columbia, South Carolina. This is not the first time Calloway’s has found its way into the 30 Under Club, and it would seem that this spot is coming a PowerPutt hotbed. Congrats to Tony on a job well done, and like that we’re off and running.

We know for a fact that Tony is not the only one to nail a -30 or better on PowerPutt LIVE, and hopefully others follow his lead.

Take your picture next to the game with your score clearly visible. Send the photo in to IT, along with your name, mailing address, and the location you played at to PowerPutt@itsgames.com. You will then be added to the hallowed halls of the 30 Under Club!