NEWS
No Upsets Here
One of the Game’s Best Goes Wire-to-Wire to Win the 2012 Wisconsin Open
http://twitter.com/share
Prev News | Next News

The month of March is all about the Cinderella story. As college basketball engulfs the sporting world, the general public is always looking for an underdog to make a charge when the curtain comes up and the spotlights are brightest. Sometimes, however, there’s just no stopping the elite.

The combination of college basketball and Golden Tee took center stage at the Wisconsin Open this past weekend as forty of the game’s best players teed it up at the second major tournament of 2012. Sussex Bowl in Sussex played host to this year’s Wisconsin clash, and Live Technologies once again showed why they are one of the best hosts in the business.

The tournament got underway on Saturday with a five-course qualifier to determine seeding and the championship bracket. Chicago’s Graig Kinzler cruised, a theme that soon became ritual throughout the weekend, shooting -123 and taking top qualifier honors. Minnesota’s Mike Sirois qualified second with a score of -117, followed by Illinois trackballer Dave Gibson (-115), and Minnesota natives Marc Muklewicz (-115) and Luke Nelson (-114).

With the bracket set, Kinzler continued his hot play after almost being upset in the first round from Golden Tee Fan’s very own Erik Nelson. He followed this up by firing off a -28 on Dusty Bend, narrowly edging Illinois pro Matt Welter by a single stroke in the match of the day. 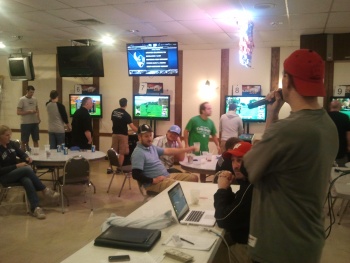 This set up a match between Kinzler and Marc Muklewicz, two guys that have played one another plenty over the past five years. The match was close and back and forth throughout, but in the end Kinzler bested Muklewicz -24 to -21 to move into the king of the hill match. His opponent was none other than Dave Gibson, who has developed into a really solid tournament player over the past few years. The two duked it out on Auburn Glen where Kinzler picked up a stroke on the second hole with an eagle. Kinzler then picked up another shot on the par-5 fifth.

The score remained that way until the fifteenth hole where’s Kinzler’s drive found the water. Gibson eagled the par-5 which tied the match back up. All square on the eighteenth hole, both players found the water with their drives. Gibson’s second attempt also found the hazard, but Kinzler was able to stick the green and sink his putt to secure a spot in the finals.

His finals opponent just happened to be the sharpshooter that took him to the very brink early on. Although Matt Welter lost in the third round on the winner’s side he battle back strong, taking out a slew of talented players to stay alive.

He capped off this run to the finals by taking out Marc Muklewicz and Dave Gibson to have a shot at redemption against unbeaten Kinzler. To take the title, however, Welter would have to beat Graig in consecutive games. Not an easy feat, especially considering Kinzler had yet to step up in any portion of the tournament thus far.

The two spun Tundra Peak and each netted Great Shot Points on the first hole, just barely missing holeouts. They remained tied until the fifth hole, where Kinzler took a one-stroke lead with an eagle. They went shot for shot on the rest of the front, and made the turn with Graig up a stroke.

Late in the round, however, Welter found trouble. After Matt going OB on 16 and 17, Kinzler headed into the final hole up four strokes. It was Kinzler’s turn to find trouble, however, as his tee shot went long and ended up out of bounds. Although things could have gotten dicey with another miss, Kinz stuck the green on his second attempt and all but locked up the win. Kinzler lagged his putt to the hole and tapped in for a two-shot victory. With that, Kinzler went wire-to-wire to win the 2012 Wisconsin Open.

Although we’ll likely see plenty of upsets in 2012, that was not to be at the Wisconsin Open. Congratulations to Graig Kinzler on taking home his first title of 2012, and thanks to everyone that made the trip to Sussex Bowl for an outstanding weekend.

Next stop, St. Louis, which is now just a few weeks away. We hope to see you all there.