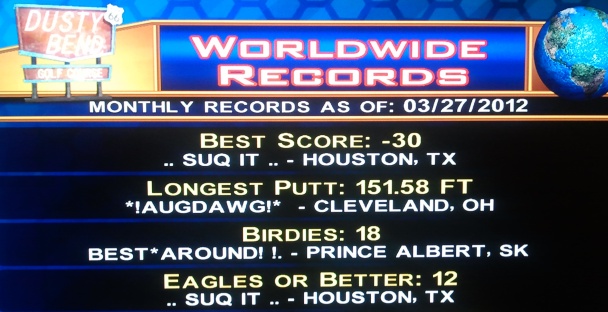 With his -30 on Dusty Bend, Houston’s Mark Stenmark has now shot a -30 on each course in Golden Tee 2012. This is not a typo or an attempt at humor, this is real and it is beyond remarkable.

When I first heard about this accomplishment, I reached out to Mark and told him to send me his hole-by-hole data to post in a story. He did that, and then some. Stenmark went above and beyond and basically wrote out what was going through his mind (and happening on his game) throughout the entire back nine.

Although you and I will never shoot a -30 on all (any?) course in 2012, we now know what it would be like in Stenamark’s descriptive account. Keep in mind, he shot -17 on the back nine alone, which would be a serviceable 18-hole round for most players.

Thanks to Mark for sending this over and congratulations go out to him on a tremendous game.

Take it away, Mr. Stenmark.

It was a rather pedestrian front 9. I was pretty surprised 2 and 5 didn't drop for me.  They burned the edge of the cup. However, if I had made those, I may not have made some of the others...who knows.

The back 9 is when things began heating up. Immediately on hole 10, I left myself 130 yards out after the tee shot. If I remember correctly, the wind was an 8 mph headwind blowing at about 5 o'clock, and the slope of the green was down 4. I cut a smooth 5-iron backspin to drop the first of the four holeouts.

Then it was on to the par-3 11th. The pin was situated in the back right corner of the green, 139 yards out with an 11 mph headwind pointed just to the 5 o'clock side of 6 o'clock. I didn't have much green with which to work, and with that type of wind, I knew a firm 5-iron thumb with bite would be perfect distance. With the left 5 slope, and the wind playing the ball ever so slightly to the right, I went with a straight shot off the tee.  The ball hit the green just to the right of the hole, and the combination of bite and the slope of the green allowed the ball to trickle perfectly down into the bottom of the cup.

The next couple holes were pretty routine, and my approach shots weren't any real threat to the holes. I left myself some tap-in putts for eagle before getting to the 14th hole. On this hole, I reached the far fairway by hitting a hard 3-wood over the house in front of the tee box. This set up an approach shot to the pin of 146 yards. The hole was cut out on the left near side of the green about half way between the front and back fringe on that left atrium. If you're familiar with the hole, the green is sloped 7 degrees to the right on this approach shot. Today's wind for this shot was 8 mph blowing at 8 o'clock.  This was a bit of a tester, but again, I picked the trusty 5-iron from my bag. If I thumbed it firm enough, I could get the ball behind the pin on the fly. Knowing this, I put bite on ball, and thumbed it firm out to the right to offset the wind. The ball landed a yard or two behind the pin, and hopped back and into the hole for a one-hop hole out. 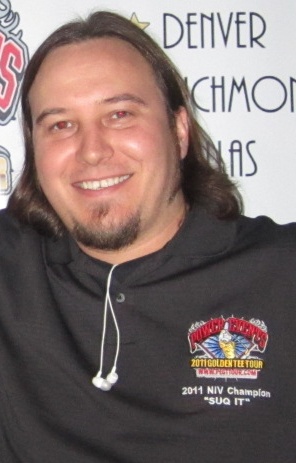 Next up was the par-5 15th. The wind today was an 8-mph headwind, and I was able to get a high teed driver into the far fairway. My approach shot in was 271 yards to the hole with the hole cut out at the bottom center of the down 4 green. This should have been an easy thumb 3-wood with bite to easily point or hole it, but I didn't get enough thumbs on my shot, and I clipped the backside of the hill on the approach. The ball quickly jettisoned off the back of the hill and shot right by the hole and into the sand.  I was looking at a 10-yard chip into an up 4 slope. Fortunately, I had enough relief from the hill face and plenty of green with which to work to make the fairly easy chip with my lob wedge. Phew...the first scare was successfully avoided.

I thought I hit a pretty good shot on my approach to the 16th, but my line was just a bit off. However, I was able to come away with another 6k in GSPs with my gap wedge. I left myself an 84 yard approach with a 13 mph tailwind blowing at 11 o'clock. I turned one to the right and hit the 70-yard club a bit firm and to the left, and the ball stopped a couple feet from the cup. Oh well, I wasn't going to let that stop me.

Next up was the sometimes treacherous par-3 17th. However, today the pin location and wind weren't bad at all. Today’s tee box gave me the straight away look at a down 10 slope just over the road. The pin was situated in the middle of the left bubble of the B-shaped green. The wind was a 9 mph gust blowing at about 2 o'clock. This is the shot that separates the men from the boys. I promptly picked my 7-wood from the bag. After selecting backspin, I put a big cut on the pullback between B and C, and I popped the ball with a little extra juice but not much towards the 2. As soon as the ball left my club face, I knew I had a chance. I hit it how I wanted, and the ball took flight towards the green. The ball began left, the cut expired, and the wind began bringing it back to center. The white orb hit behind the hole on the left, and the backspin jerked it back up the 10 degree slope to the right, and the ball disappeared dead center in the cup.

As soon as the ball dropped on the 17th, I mentally crossed my fingers for a manageable 18th hole. The hole loaded up, and although it wasn't a great look, it was one I wasn't unhappy to see. The pin was at the bottom right side of the green 315 yards away from the tee box, but the wind was a strong 15-mph tailwind blowing almost straight to 12 o'clock. My offset had me facing about 7 or 8 yards right of the green.

This is normally a routine cut 3-wood hoping to stick the green for an eagle putt or leave a makeable uphill chip for eagle. However, with a lot at stake, this shot quickly became more difficult for me as I thought of the possibilities of where I may miss the ball. If I hit it too soft, the ball may stop above the hole, and I could risk the dreaded rollover to kill my round.  I wasn't going to do that. If I cut the ball too much, I end up in the bunker, and with where the pin was, this would make for a very difficult chip, and I didn't want to do that. If I undercut the ball, I end up with a long right 8 or 9 degree chip, and I don't want to do that. So I carefully decided to make sure I played enough cut to get back to center, and I made sure to pop the ball hard enough to leave me an uphill chip if I didn't stick the green. Well a 15 mph wind is pretty strong, and the extra pop I put on the ball carried me further than I wanted.

The ball came hopping to a stop 18 yards behind the hole in the middle of the street. Luckily, I made it back close to center cup line, and the slope of the green in front of me was up 9 right 4, and the wind was now 15 mph blowing at 5 o'clock. I had about 5 yards of green to land the ball, and with the severe up slope of the green, I should be able to put a little extra heat on the ball and still have it rattle into the hole if I can hit a good line. I thought about hitting the 8-iron, but I wanted to take as much break out of the equation as possible so I opted for the Tin Cup 7-iron. I pulled back enough to put a little extra on the ball, and then I let the chip fly. The ball hit the green just to the left of the cup, and the speed of the chip coupled with the right 4 sloped in the green caused the ball to drift back to the right and drop center cup.

Caught up in the moment, I belted out a mighty, "That's what daddy's talking about!"  My buddies Paul and Joe gave me high-fives, and I apologized to the other patrons in the bar who were enjoying their food.