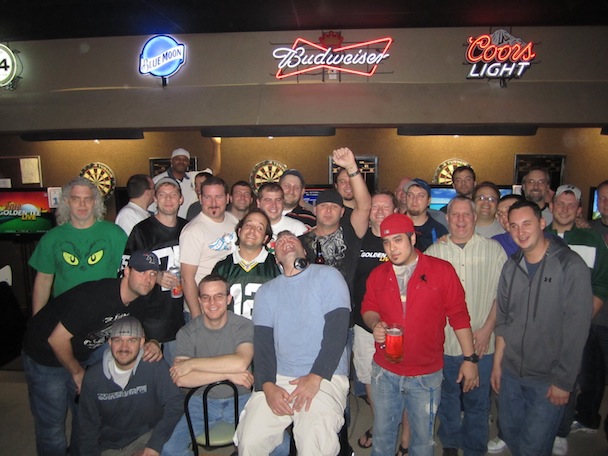 Volcanos Sports Bar and Grill played host to the 2011 Dallas Holiday Classic, which saw Houston’s Mark Stenmark cap off a brilliant year with one last tournament win. And while this was the final open tourney of 2011, Power Events hosted one last tournament to decide the Player of the Year.

Once the Dallas Holiday Classic had concluded, the top 32 players with the most PEGT Tour points were placed in one final bracket. These PEGT Tour Points were accumulated throughout the year in the six different PEGT events around in the country. The results were tallied, and an hour or so after the DHC concluded, the game’s best were seeded and placed into one last 2011 bracket. Just like the Dallas Holiday Classic, the PEGT Player of the Year Tournament was double-elimination.

Early on, some of the favorites to win this tournament (well, any tournament) went down. Missouri’s Jeff Harlow had lost to Mark Stenmark in the Dallas Holiday Classic finals earlier that day, but he bounced back by firing a -26 against Mark in the3rd round of the Player of the Year tournament to send the favorite to the losers bracket and move on.

Golden Tee world champions Andy Haas and Graig Kinzler also suffered losses, as did Minnesota’s Chris Thorbrogger (the 2nd seed) and Illinois trackballer Jeff Lannen (the 6th seed). This made for some very intriguing matches on the winners side, and some familiar faces and up-and-coming stars made the most of it.

Minnesota’s Andy Fox is not new to the competitive GT scene by any means. He’s been a major factor in major tournaments in the past and has established himself as one of the premier players in the country. Fox, however, still had no tourney hardware to show for it heading into this weekend. 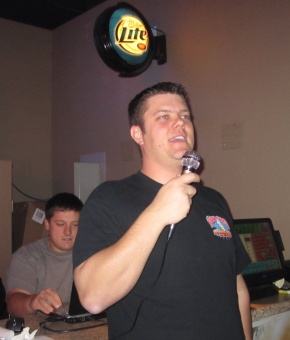 After finishing 5th/6th in the DHC, Fox came out of the gates in the Player of the Year tourney blazing. Andy fired two -26s in first three matches and continued his hot play into the king of the hill match. His opponent was none other than Missouri’s Jeff Harlow, who was playing in his second king of the hill match of the day!

The two duked it out in a tight match on Royal Cove, but in the end Fox edged Harlow -22 to -21 to move into the finals. For Harlow, this marked the second time he had come up just short of the finals initially, but just like earlier that day he was far from done in this one.

On the other side of the bracket, some of the game’s best played it out with zero room for error.

After losing early on, Jeff Lannen battled back in a big way. In consecutive matches, Jeff beat Illinois pro Matt Welter, followed by Graig Kinzler, Ohio’s Andy Haas, Houston’s Mark Stenmark, Kansas native Danny “Dannyboy” Beall and finally Paul “Putz” Tayloe. It’s tiring just to write it, and we can assume that Lannen must have been absolutely exhausted. His marathon run earned him a match against Jeff Harlow for a spot in the finals.

Playing on Grand Canyon, Harlow finally went up a stroke on the 12th hole. Harlow then holed out on the 15th hole to build his lead to two. Although Lannen gained back a stroke in the final stretch, it was Harlow prevailing -25 to -24 to move into the finals.

For the second time that day, Jeff Harlow found himself in the finals of a Golden Tee tournament. We’ve seen some amazing feats in the game over the past five years or so but Harlow’s Dallas weekend ranks right near the top. Andy Fox, however, was looking to make a little history himself and you could tell he wanted to his first tournament title oh so badly. Because Harlow already had a loss under his belt, he would have to take down Fox twice in a row.

The entire room surrounded the machine as Fox and Harlow teed it up on Tundra Peak. And then the fireworks really began.

Andy Fox jumped out to an early lead with a timely double eagle on the 4th hole. He then increased his lead to two strokes with ANOTHER double eagle on the 8th! Fox headed to the back nine up two strokes, but Harlow quickly erased that lead with an incredible chip on the 11th for eagle while Andy got par. The two remained deadlocked until the par-3 17th where Fox went OB and Harlow headed into the 18th up a stroke. Each stuck the 18th green, but Harlow lagged his putt near the hole and tapped in for birdie. Fox, who was given a brutal downhill putt, sunk it for eagle to tie it and the two went into sudden death.

The two remained deadlocked in sudden death, with each player just BARELY missing winning the match on almost every approach into the green. The room was tense, and the atmosphere was perhaps the most electric we’ve seen a live event in quite a while. On the 9th hole, however, Fox stuck the green and Harlow’s ball plugged in the snow. The result was an eagle for Andy and a birdie for Jeff giving Andy Fox the win and the 2011 Player of the Year Tournament title!

What a weekend, what a tournament, what a match, what a win. Andy’s first ever Golden Tee title capped off a magnificent weekend of Golden Tee.

Be sure to check out the Dallas Holiday Classic recap, for a full rundown on the other Power Events tournament that took place. On that note, we must once again thank Volcanos for playing host and tip our cap to Power Events for another outstanding live event. This will be a weekend that those in attendance remember for quite sometime.

Congratulations to Andy Fox on a fantastic and gutsy win, and thank you to everyone that made the trip to Dallas for the final Golden Tee tournament of 2011.

See you next year! 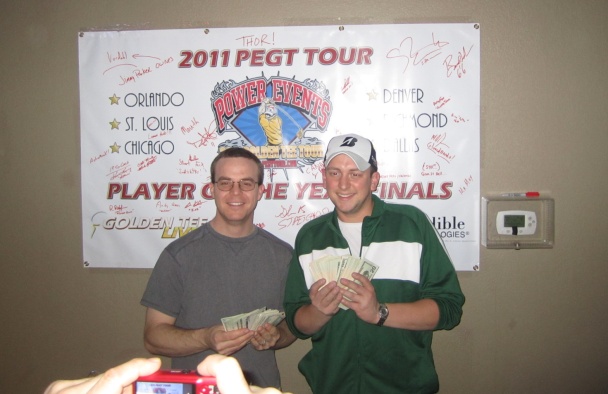