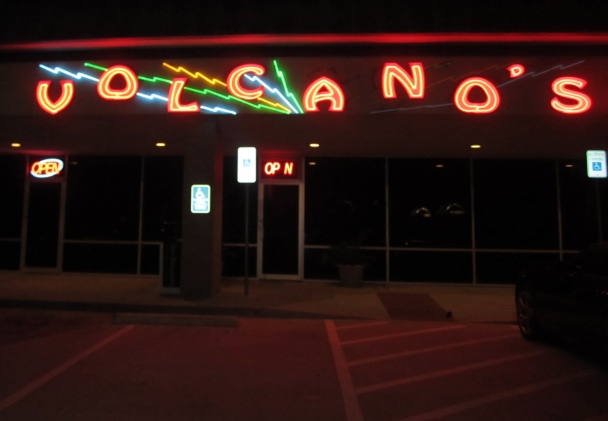 Ninety-five players made the trip to Volcanos Sports Bar in Texas for the 2011 Dallas Holiday Classic.

Before we dive deep into the results, we must first thank the Volcanos staff for their tremendous hospitality throughout the weekend. Hosting one hundred Golden Tee players for four days isn’t a walk in the park, but they certainly made it look easy. We must also thank Power Events for putting on another wonderful weekend and congratulate them on a superb first full tournament season.

Did we mention there was some serious Golden Tee played this weekend?

And away we go…

The five-course qualifier kicked off the festivities on Saturday morning and some of the game’s best players came out of the gate strong. Minnesota’s Marc “The Mouth” Muklewicz led the way with a five-course qualifying score of -126. Right on his heels was Illinois trackballer Matt Welter who fired off a -125. Ohio’s Andy Haas qualified third (-124), followed by Chicago native Graig Kinzler (-122), and Minnesota’s Andy Fox (-120).

The top 32 players that qualified were seeded and placed into the main bracket. The 32nd overall player, Minnesota’s Lance Harris, earned the final spot with a combined score of -102. This was perhaps the strongest tournament field of any GT tournament all year.

With matches underway, Golden Tee 2012’s most dominant force made his presence felt right out of the gate. Houston native Mark Stenmark has been the number one player in the Golden Tee World Rankings, he won the last tournament he played in and even shot a -31 on a 2012 course a short while back.

He continued his hot play early and took down Minnesota’s Todd Penticoff, Florida golfer Sean Gervais and fellow Texas and longtime GT pro Sonny Tunstall. While Stenmark prevailed in these matches, all three were extremely tight and decided by two strokes or less. Mark then took down two-time Golden Tee world champion Graig Kinzler and moved one match away from the Dallas Holiday Classic Finals.

Getting into this match would be no easy task, however, as another former world champion was in his way. Missouri’s Jeff Harlow may not play the same amount of games he once did, but he still has PLENTY of game which he exhibited throughout this tournament weekend. 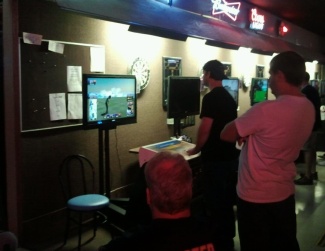 Harlow and Stenmark teed it up on Tundra Peak with a spot in the finals up for grabs. The winner of this match would go to championship unbeaten, while the loser would have to make up some ground to get back in the finals.

The match was tight throughout, but it was Stenmark who headed into the par-4 18th up a stroke. Mark stuck the green with his tee shot which all but forced Harlow to come up with a miraculous ace, and he almost did! Jeff’s ball just missed going in, which gave each an eagle putt. Stenmark clinched victory once he sank his putt and edged Harlow -25 to -24 in a superb king of the hill match.

With Mark in the finals, Harlow waited for his opportunity to play his way back in as others battled it out in the losers bracket. After the dust had settled, three former world champions remained. Andy Haas then took down Graig Kinzler on Royal Cove, which setup a match between him and Harlow. The winner would get a crack at the undefeated Stenmark.

Playing on Grand Canyon, Harlow rallied late and took down Haas -23 to -21 to secure a rematch in the Dallas Holiday Classic finals. For Harlow to take the title he would have to beat Stenmark twice, which is no easy feat considering what Mark has accomplished in the last few months.

The two duked it out on Royal Cove and Stenmark jumped out of the gate strong. He chipped in on the second hole to take a one-shot lead. On the 9th hole, Harlow’s drive found the water and Stenmark extended his lead to four. From that point, Mark put it in cruise control and fired a -25 to take home the Dallas Holiday Classic title!

What a year it’s been for Mark. He’s asserted himself as the man to beat and only furthered this reputation by going undefeated in the Dallas Holiday Classic.

Weekend over, right? Not. Even. Close.

Although the Dallas Holiday Classic was a sight to see, it wasn’t the only sight. The top 32 players with the most PEGT Tour points following this tournament had once last chance to duke it out in Power Events Player of the Year Tournament. You will NOT want to miss what happened in this, as Golden Tee’s tournament season was wrapped up in absolutely thrilling fashion.

Congratulations to Mark Stenmark on another magnificent tournament win, and stay tuned to Goldentee.com for a full POTY recap! 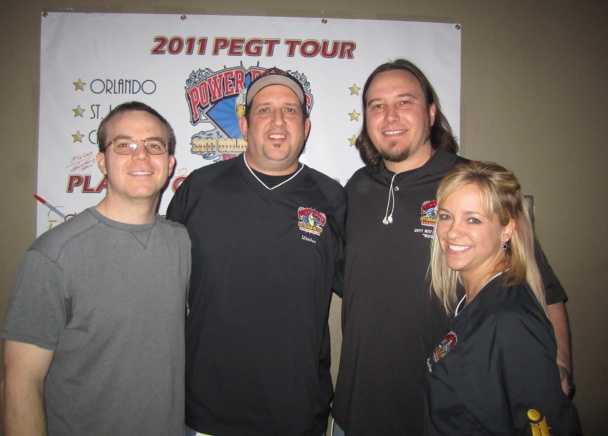