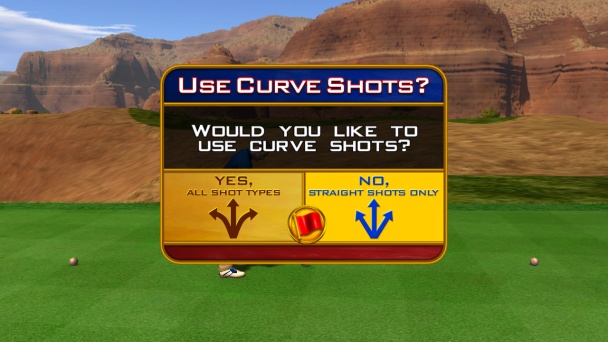 A large portion of you that visit this site on a daily or weekly basis are Golden Tee card-carrying users and will refuse to play a game of Tee without having your golfer, equipment and stats in play.

For some of you, however, Casual Play is your trackball outlet of choice and you’re only looking for a taste of GT when you have ample time to spin a game or two. You love the game but aren’t worried about some of the extras that many of us can’t live without.

If you’re an avid GT player who chooses not to swipe into the game, Golden Tee 2012 has a few new options that could help you improve your scores and also award you local prizes in the process.

Eliminate mistakes and stay straight off the tee. Golfers now have the option to hit the ball straight with every shot in Casual Play.

At the start of a Casual game, all players will be asked if they would "Like to Use Curve Shots?" If they choose "Yes" then the trackball will operate as usual and players will be able to curve the ball in any direction.

If "No" is selected then their shots will travel straight, similar to putting, and they won't have to worry about the direction of their pullback.

“For the true casual player, putting curve on shots can hurt their game much more than it helps them” said GT course creator Jim Zielinski. “In most situations, a player will unintentionally curve the ball without wanting to. This option - which has been tested throughout the creation process - improved scores while eliminating some room for error. It’s certainly not for everyone, but could help those looking to safely get off the tee.”

Casual "Player of the Week" Drawings

In the past only those that participated in LIVE play had a chance at winning prizes. This is about to change, as long as this feature is enabled by the location or your local operator.

On the 18th tee in a Casual game, players will be asked if they'd like to be a part of a weekly drawing. If interested they'll simply enter their name and be automatically included in a drawing that will take place on the game at the end of each week. The prizes will vary from location, but it's something to look for.

Scores don't compete with other players around the world or even at your location? Here's a perfect way to potentially cash in simply by playing! Be sure to talk to your location about this new feature.

“Locations and operators have been doing similar types of giveaways for quite a while, and now we’re just providing an on-game option to continue to do so,” Zielinski said. “This is a way to win prizes without having to compete in Prize Play or even worry about your score.”

These features will be yours once 2012 ships, and we'll have more information once it launches. On that note, this wonderful day that you’ve undoubtedly been looking forward to for months is Monday, September 26th!