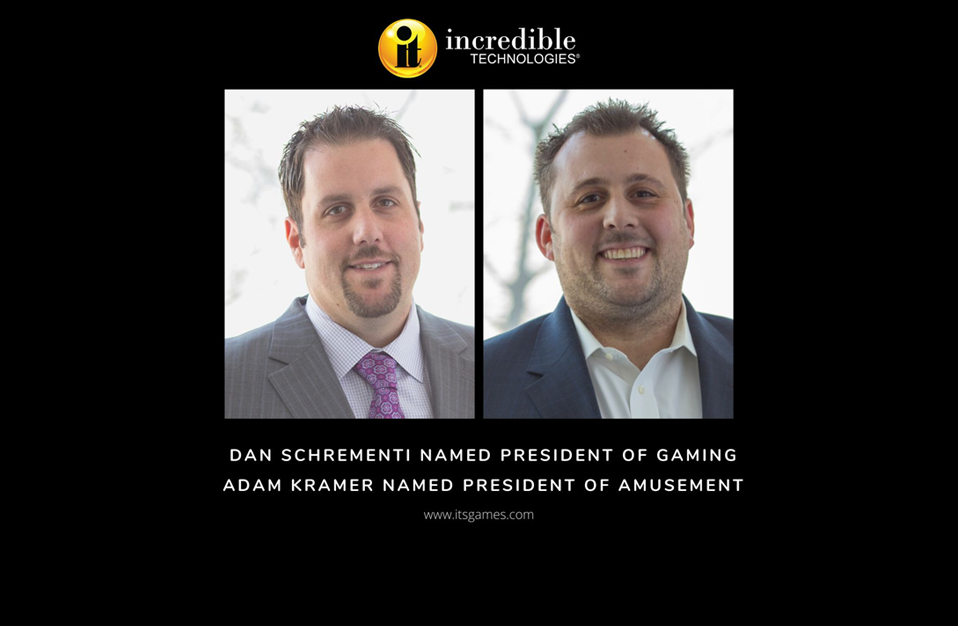 (June 16, 2021 – Vernon Hills, IL) – Incredible Technologies (IT) announced several key changes within its executive leadership structure. Co-founders Elaine Hodgson and Richard Ditton will remain the sole owners and board members of the privately held company. Elaine Hodgson’s title will change to CEO and Richard Ditton will retain his title as Executive Vice President. In addition, Dan Schrementi was named President of Gaming and Adam Kramer was named President of Amusement.

“Dan and Adam have worked hard to become experts in their industries,” said Hodgson. “They have the leadership ability, energy and drive to take each division to new levels. After having started, nurtured and grown IT with Richard for 36 years, I can show no higher praise than to hand the keys to Dan and Adam.”

Both Schrementi and Kramer most recently served on the company’s executive team as vice presidents, with each now bringing over a decade of leadership experience within the company to their new roles. Schrementi and Kramer will be responsible for leading their respective divisions and providing growth strategies and key initiatives, all while ensuring that the company’s overall goals and storied history remain aligned.

“Under Elaine and Richard’s guidance, Incredible Technologies has succeeded through its people, products and plans,” said Schrementi. “To have the opportunity to lead these pillars for our casino gaming division is an honor and challenge that I am prepared to accept. Our team of talented people has been working hard, and I am excited to show the gaming industry where we are headed in this next chapter of our incredible story.”

Kramer echoed this sentiment, “Having spent the past 13 years immersed in the marketing and development of Golden Tee, I am thrilled to take on this role,” he said. “The culture and vision of Incredible Technologies created and molded by Elaine and Richard is something deeply important to me and to our products. We will continue to create games people love to play and innovate – something that has always been at the core of IT.”

Additionally, Daymon Ruttenberg, who has served as the company’s General Counsel & VP of Regulatory Affairs since 2015, has been named as Senior Vice President of Gaming and will manage strategic and business development initiatives. Larry Hodgson, who has been with IT for over 30 years and most recently as VP of Engineering, will now serve as Senior Vice President where he will provide strategic oversight and optimize cross-functionality throughout the organization.

On a personal note, the entire Amusement Division and Golden Tee team is proud to have work with Dan and Adam in many different capacities over the last 17 years.

We are thankful for Richard and Elaine's leadership over the last 36 years and are excited to see where Dan and Adam will take Incredible Technologies in the near future!

Maybe there is a President vs President game of Golden Tee to happen in the future...?  Duffer Dan vs Baby Gap.  We're going to make this happen!