NEWS
Behind the Design: Countryside Lake
Eric Manfredi Shares How His Winning Design Came to Be
http://twitter.com/share
Prev News | Next News 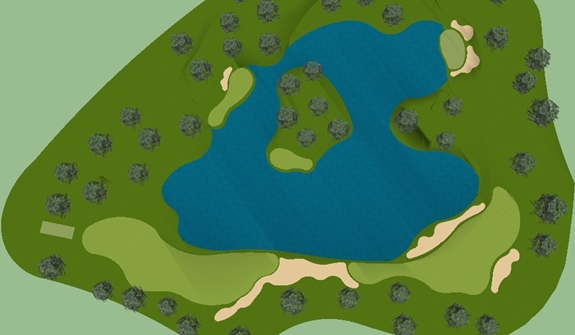 To find the inspiration of this year’s Design-a-Hole winning creation, we need to take a five-and-a-half mile drive northeast from the Golden Tee headquarters.

Taking one congested road, past multiple sets of travel-crushing train tracks and past a handful of popular Golden Tee hangouts, you will eventually reach Countryside Golf Course—a popular local 36-hole spot that breeds six-hour rounds. Nestled within one of the courses is Countryside Lake—a private lake surrounded by homes.

It is also, strangely enough, where Eric Manfredi’s Golden Tee voyage began. It's where he grew up. Less than six miles from the place the name originated, the hole will go from concept to creation. 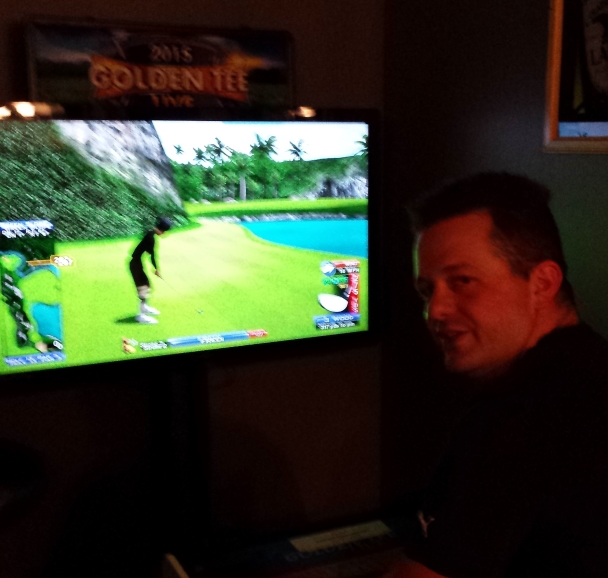 This spring, Manfredi’s par-5, Countryside Lake, was picked over more than 150 designs as our Design-a-Hole winner.  For winning, Manfredi will win his own Golden Tee 2016 Home Edition; he will also watch his local creation go from concept to living, breathing, playable hole in the next installment of GT.

The 32-year-old is no novice to the contest; he’s submitted the past few years and experimented with different ideas to get the judges attention. What he found—and this is something other designers should absolutely take note of—that less, in some ways, can be more.

“My initial approach to this contest was to be creative and create a hole that was totally unique, something that hadn't been done before,” Manfredi said. “I accomplished that with an appearance in the finals a few years ago but ultimately I think my design was fun to think about but hard to implement.”

So he adjusted. Instead of creating courses for specific locations, he created golf holes that could fit in just about anywhere. Manfredi submitted eight different designs, all of which had a similar golf-centric look.

There were no baseball stadiums, no caves and no location-specific obstacles.

“I tried to simplify my approach and put less emphasis on creativity/originality and more on practicality,” Manfredi said. “That's not to say I didn't try to be creative. But I was a little more realistic in terms of how courses are typically set up and what is possible to do with the golf ball.”

Of all his designs, Countryside Lake was the one that instantly got the judges’ attention. They looked how, somehow, it was simple and original; straightforward and remarkably detailed; fair but challenging.

They saw the risk and reward—the essence of Golden Tee—and liked the originality of the shots necessary to succeed. 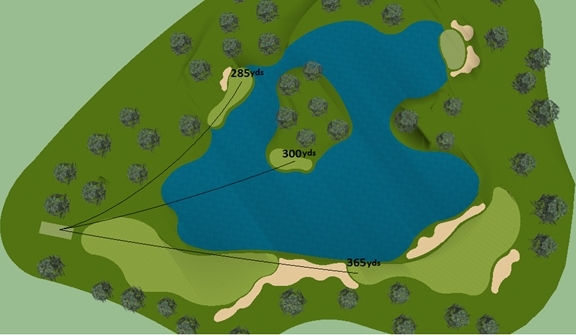 “It just started with an idea of having a par 5 that had several options off the tee, each being a different shot type with different tradeoffs,” Manfredi said. “I started off by wrapping a fairway around a body of water and everything else kind of fell into place after that.”

Having played the game since 2007, Manfredi has acquired knowledge of the courses and strategy involved that only a small percentage of players obtain over time. Although he dabbled with the game early on, he got hooked once Golden Tee 2013 hit. His +25 handicap reflects that.

At around the time his game started to take shape, his Design-a-Hole interests started to peak. Countryside Lake was the pinnacle of observations and countless hours on the trackball and also at the design table.

“I like that it has the potential to set up in some interesting ways depending on the wind and where you are in the tee box,” Manfredi said on his design. “I didn't want there to be one clear route to go each time you play.

The hours he exhausted this year ultimately paid off.

The moment Manfredi found out he won the contest and a place in Golden Tee history, he texted a friend in a state of shock. He then cracked open a beer he had been saving for just the right occasion.

“I enjoyed the hell out of it,” he said.

The celebration on his end gave way for work on ours. Course designer Jim Zielinski has already built Countryside Lake into 2016. It is not final yet, although it has found its home in the game—something we will be revealing very, very soon.

Manfredi, however, still hasn’t gotten over the shock and euphoria of the triumph. As he waits for his own Home Edition and his design’s final transformation, the gravity of it all—of years of work, games played and efforts—is just starting to sink in.

“It feels incredible to be interacting with a game I love on a whole other level like this,” Manfredi said. “It's cool to think about the idea that it will always be there. Hopefully players will be challenged depending on the set up and what they are comfortable doing.”