NEWS
An Eventful Richmond Weekend
The NIV Delivers (Again), as if You Expected Anything Different
http://twitter.com/share
Prev News | Next News 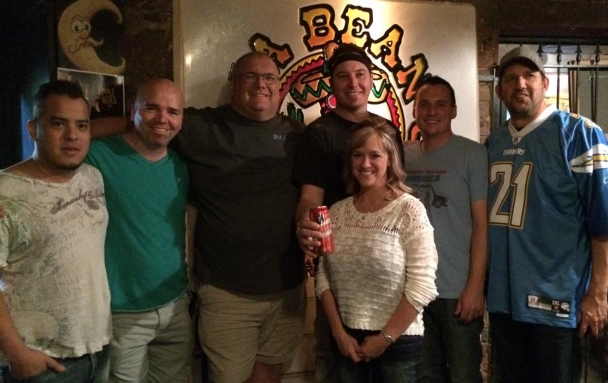 The NIV has become one of Golden Tee’s great treasures.

One weekend—not just a tournament, but an event—built around the game, the people, the food, the beer and the camaraderie that have helped grow GT to what it is today.

With Power Events teaming up with Jefe Alums, the mastermind behind this great weekend, the event has only picked up steam in recent years. And with Baja Bean playing host to the tournament once again, the 2014 tournament was—to the surprise of no one—a smashing success.

Playing on the Golden Tee 2015 courses in tournament play for the first time, 54 players teed it up this past week. Per usual, the tournament began with a five-course qualifier that took up most of Saturday.

The 32 players with the best scores from all five rounds were placed into the main bracket. Ohio’s Andy Haas was the top overall qualifier, besting the rest of the competition by three strokes with his jaw-dropping -134. Houston’s Mark Stenmark and Missouri’s Evan Gossett took second and third with a combined score of -131.

The Top 10 from qualifying was as follows:

With the bracket set, the top two seeds continued to thrive as double-elimination match play began. Haas and Stenmark each played through opposite ends of the bracket without a loss until the king of the hill showdown. The winner of this match was guaranteed a spot in the finals.

Playing on Desert Valley Resort, it was Stenmark getting the best of the top qualifier with a -26. He awaited his finals opponent.

On the other side of the bracket, with the room for error gone, North Carolina’s David Duncan was on fire. After taking out former world champion Chris Eversole, Duncan took out Texan Paul Luna to set up a match with Haas.

In perhaps the match of the weekend, playing on Sparkling Waters, Duncan took out Haas in thrilling fashion, -29 to -28. With his superb 18-hole performance, Duncan played his way into the championship match.

To win the NIV, however, Duncan would have to beat the unblemished Stenmark twice.

Playing on Celtic Shores, Stenmark jumped out to an early lead. Duncan battled back, taking advantage of a few Stenmark missed putts and adding in a hole out.

Down one going into the tricky Hole 18, Duncan hit the green and was left with a difficult putt. Stenmark, somewhat surprisingly just played for the fairway. His approach nestled next to the hole for birdie, which meant Duncan had to make a long, nasty, uphill putt to tie. He just barely pushed it pass the hole, which gave Stenmark the NIV crown.

You can watch the match here.

What a tournament it was and what a weekend it was overall. Special thanks must go out to Power Events along with Jefe Alums for keeping one of the game’s most storied weekends alive and well. The NIV truly is must-see, and mark it down on your calendar next year if you were unable to attend.

Congratulations to Stenmark on the first win of the 2015 courses! Just like that, only one tournament remains. (Well, two, although will both take place in Houston in early December on the same action-packed weekend.)

Much more information on this to come; visit PEGTtour.com for more!