Sean Gervais had a vision.

Call it a bold prediction of sorts. A dash of humor, a sprinkle of fun, and a solid serving of natural confidence, the Florida GT pro predicted he would win the first Golden Tee tournament of the year, keeping the title in his home state.

At the 2014 Florida Open, this vision was realized.

77 players teed it up at Backstage Billiards in Orlando for Power Events’ first PEGT Tour of the year, a fabulous showing and a massive increase in attendees from last year’s tournament.

Houston’s Mark Stenmark was No. 2 overall with a qualifying score, while Sean Gervais qualified third with a total of -123. The rest of the top 10 was as follows:

With the bracket set, match play began and Gervais got rolling.

After winning a handful of matches, Gervais edged Stenmark in sudden death on Pelican Grove after each fired -27s to send it to extras. From there, Gervais took out Georgia native Adam Harris—who delivered an outstanding breakout tournament—also in sudden death, securing a spot in the finals. 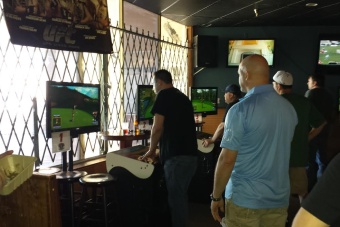 As the double-elimination bracket unfolded, Gervais waited for his opponent. After getting bounced earlier in the day, Evan Gossett bounced back by taking out the Harris contingent.

First, it was Illinois native Brendan “B-Man” Harris, who fell to Gossett -24 to -22. Next, Gossett got his revenge against Adam Harris—the man who took him out earlier in the tourney—besting him -25 to -18 to move into the finals.

To win the tournament, Gossett would have to take out Gervais twice. This was an uphill climb considering how the matches early on unfolded in Gervais' favor.

Playing on Shady Acres, however, Gossett and Gervais each fired -25s and went to sudden death. While overtime was good to Gervais throughout much of the weekend, Gossett got the best of him here. His win set up a winner-take-all scenario, a fitting end to the first Golden Tee tournament.

The two spun Shady again, and again the game was close. This time, it was Gervais prevailing in a close game, besting his buddy -24 to -23 to win the Florida Open.

Just like he predicted it. (Although if you ask him, he likely didn't see that one loss coming. This will do just fine, though.)

Special thanks must go out to Power Events for another brilliant weekend along with everyone at BackStage Billiards. If this turnout and overall celebration of the game is a sign of things to come in 2014, then we’re in for an amazing year of competitive Golden Tee.

Congratulations to Sean Gervais on his win, and thanks to everyone who attended. What a tourney.

We’ll see you all at the Missouri Open in April. For more information on this event and the others to follow, visit PEGTtour.com.