NEWS
Ranking Reboot
With the 2014 Courses Taking Center Stage, We Look Back at the First Month of GT World Rankings
http://twitter.com/share
Prev News | Next News

The first month of Golden Tee World Rankings on 2014 courses has come to a close, and the competition was fierce as expected. We wouldn't have it any other way.

16,189 (!!!) players received their World Ranking during the month of October, a monster number that signifies the excitement felt with the launch of the new update. That’s 324 pages of rankings on the Online Leaderboard, but thankfully you no longer have to sort through them all—unless you want to—to see where you stack up.

As for the top of the leaderboard, some familiar faces found their places on the new courses. Houston’s Mark Stenmark edged out fellow Texas Ed Godfrey with Great Shot Points, while a close pack of players weren’t far behind. 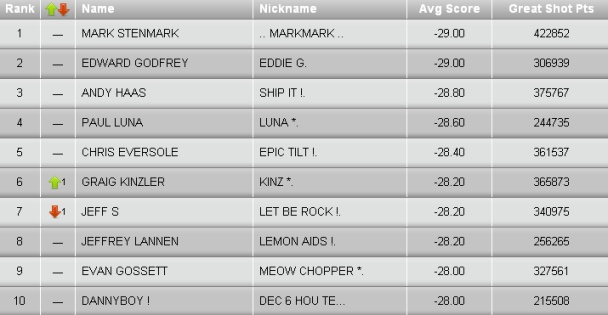 Whether you’re going for the No. 1 spot or the No. 1 spot in your bar, the Golden Tee World Rankings are the perfect way to put your game to test. Just play one round on each of the 2014 courses and you’ll receive a rank on the Online Leaderboard. This rank will also show up on the payment screen on all Golden Tee 2014 games.

Once you hit your minimum, a bad game won’t hurt you. Improve your ranking throughout the month by improving your scores and increasing your five-score average.

How many players will get their rank in November?