With more than $30,000 in prizes up for grabs—along with Harley—Club Lucky’s highly anticipated Tournament of Champions 5 lived up to the billing.

The KCI-Expo Center serves as the epicenter for Golden Tee this weekend, with many of the game’s best players eyeing the massive $8,000 top prize and one of the game’s most desired tournament titles.

In the end, it was a familiar face—one who has been awfully busy this month—coming away victorious.

Houston’s Mark Stenmark was still enjoying his PEGT Tour win at Richmond from the prior week, although that didn’t slow him down at the TOC. Stenmark cruised to his second victory in a seven-day stretch to take the $8,000 prize and the coveted title.

Here’s how the Gold and Purple brackets ended up. 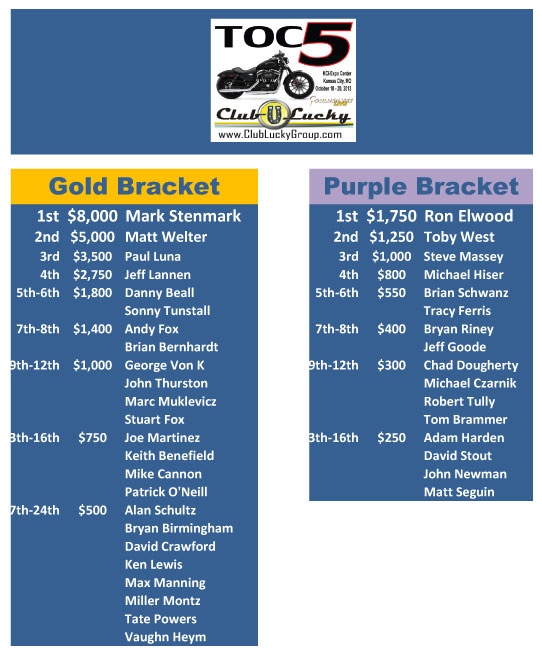 As for the Harley, Toby West walked away victorious. After walking away with a second place finish in the Purple bracket, it proved to be quite the weekend for Mr. West!

Congratulations go out to Stenmark on a fantastic run of Tee, and special thanks certainly are in order for Club Lucky. We’ll have plenty more on Club Lucky events and other GT tournaments to come.

Stay tuned to Goldentee.com for it all!