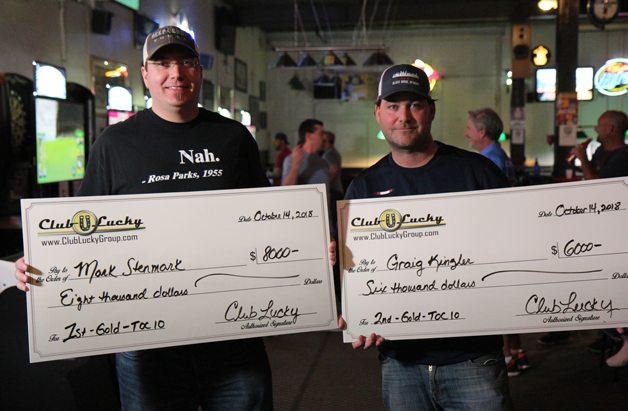 Mark Stenmark might not play Golden Tee as often as he did in years past, but when it comes to tournament match play, he is still one of the best to grace a trackball in the 20 year history of live events.

He went undefeated this past weekend at the Club Lucky Tournament of Champions 10, defeating many top talent, including 2-time World Champion Graig Kinzler, in order to take home the TOC 10 Championship and a sweet $8,000 top prize!

Graig Kinzler, someone who also would undoubtedly be a part of most people's #GoldenTee Mount Rushmore, had an amazing showing this weekend as well.  Kinzler, with his family by his side, was able to seize a second place victory, despite the stress and emotional toll from a house fire that occurred one week before this event.  He told us that "Golden Tee is a good distraction around a time like this."  That distraction was able to get him a $6,000 prize for second place.

On the purple side of the brackets, Cory Edwards battled back to a 1st place victory after losing to Mitch Zultanski in the King of the Hill match.  Defeating Mitch twice to claim 1st place in the purple bracket, Edwards walked away with a $2,300 prize and Mitch walked away with $1,400 for his hard work last Sunday.

A huge thank you to Kim, Larry and everyone from the Club Lucky Group for all the work they do throughout the year to support their big event in October!  Another thank you to Pitcher's Pub in Madison, Wisconsin.  They seemed to have a lot of fun hosting this event, so hopefully we will see them again next year!