NEWS
Smoke 'Em If Ya Got 'Em
The Most Amazing “Head Gear” Item Ever Created Can Be Yours in Golden Tee 2014
http://twitter.com/share
Prev News | Next News 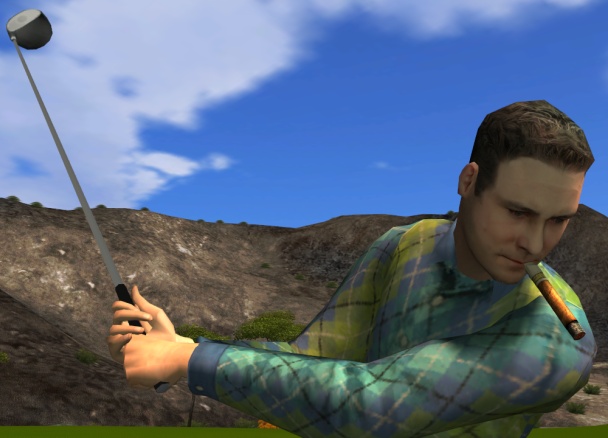 For most avid golfers out there—regardless of handicap—a round of golf is not officially complete until a beer (well, beers) and a cigar (well, cigars) are involved.

In Golden Tee 2014, this ideal golfing environment has been realized.

You have the golf in Golden Tee, and chances are you have the beer, so that’s no problem. But the cigar can be a bit dicey, especially in a building that may or may not allow smoke. Plus, that guy eating his sandwich 10 feet from you might not exactly be happy with this development. 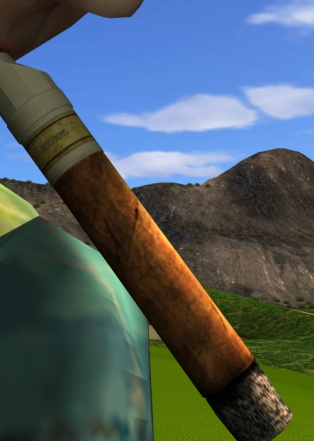 For those who have wished that they could combine this trifecta in Golden Tee, however, your prayers have been answered in Golden Tee 2014. Oh, you're going to dig this.

Yes, a cigar will be an unlockable “head gear” item in the next installment of the game which is closing in. And this is probably the most amazing piece of virtual clothing we’ve ever created.

“The idea has come up before, but we just haven’t had a chance to get it in the game,” Golden Tee artist Mike Sanchez said. “Matching up the cigar with the different heads and mouths was the biggest challenge for us, but it’s something we’ve wanted to do for quite some time. Thankfully, it made the cut in 2014.”

There’s no Giveaway Code for this piece of “wardrobe” excellence. You’ll be able to unlock the cigar like you’ve unlocked hundreds of items in the past - through games started, birdies, eagles and holes-in-one.

From that point on, your virtual golfer can look a lot like you, only the scores will (hopefully) be better than your actual golf scores.

The cigar is just the top of the iceberg. Stay tuned to Goldentee.com for everything Golden Tee 2014. Also, if you haven’t seen the five new course trailers yet, you may do so here.