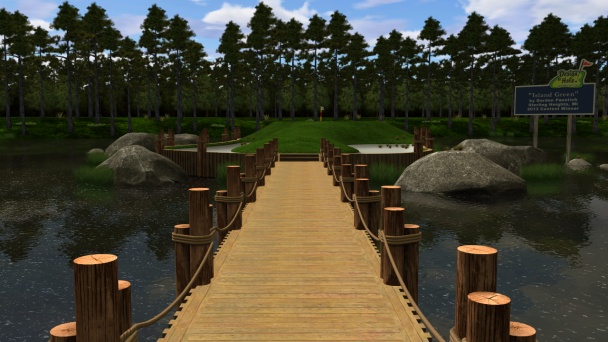 You’ve gotten a glimpse of this year’s Design-a-Hole, now hear from the man tasked to bringing it to life.

Course designer Jim Zielinski and the talented GT design team are hard at work on another installment, and Island Green—this year’s winning design—is now well under construction. As seen in some of the images already released, the Golden Tee crew has reached the fine-tuning stage of Gordon Faustich’s par-3.

As is the case each year, however, alterations are made to turn this concept into creation. A design on paper undergoes modifications in order to fit into Golden Tee. The origins or “guts” of these designs, however, remain intact.

“Some Design-a-Holes have required more work than others, and you really never know how much will have to change until you start the design process,” Jim Zielinski said. “The goal is always to keep the key features of the design in place, and with Island Green we have been able to do this.”

Some of the notable changes include the dimensions of the overall design, specifically the green as well as the surrounding bunkers and rough. In order to keep the distance of the par-3 to the intended scale, the size of the island had to be increased.

“Keeping the distances right was integral, and in order to do that we had to adjust the size of the green and the area around it,” Zielinski said. “We didn’t want to make it a shorter hole, so the overall scale had to be modified.” 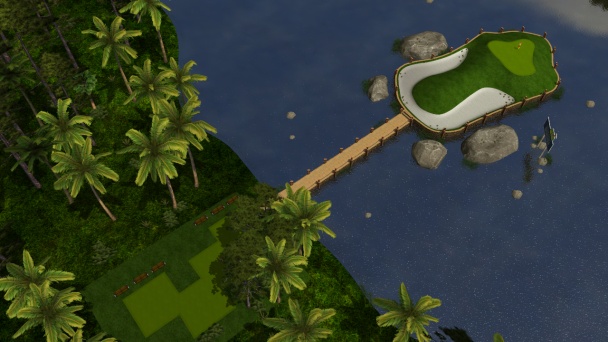 The result is a par-3 situated on the start of the back nine—the 12th hole right now, although that could change before launch—and a shot that could vary greatly depending on conditions.

If the wind is calm, this tee shot should provide an outstanding birdie opportunity or even a solid look at a hole-in-one. If it’s blustery—especially with a strong right-to-left wind—the shot becomes much more challenging.

The trees situated in front of the tee box could become an obstacle depending on the wind. This area is still not complete and will receive changes before the update officially launches.

As is, it already presents a potentially fascinating shot into the green. 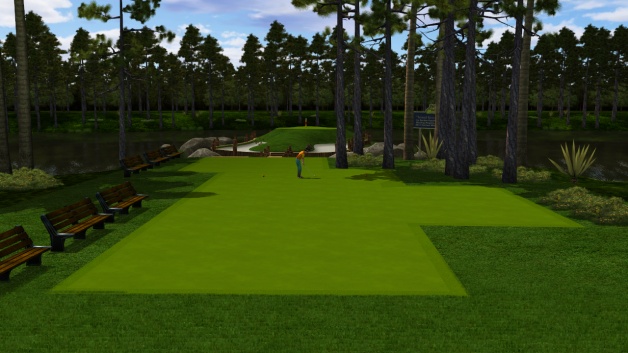 “Depending on the conditions, a lot of thought will go into the shot,” Zielinski noted. “Going long likely means water, short means sand, and factoring in a difficult wind will make this a fun shot to attempt. It should be a unique experience round to round.”

Aside from the strategy in place, the design team has done a fabulous job (again) getting this hole ready in a matter of weeks. The sign—signifying this design as Gordon’s—is up, and the magnificently detailed bridge connecting the tee box to the green is complete.

Island Green is taking shape, readying for Golden Tee 2014. We will have much more on the design and the update in the coming days, weeks and months. Stay tuned to Goldentee.com for more.