NEWS
Gobble Gobble, Y'all
With a New Giveaway Code on the Horizon, We Embrace our Vintage Thanksgiving Gear
http://twitter.com/share
Prev News | Next News 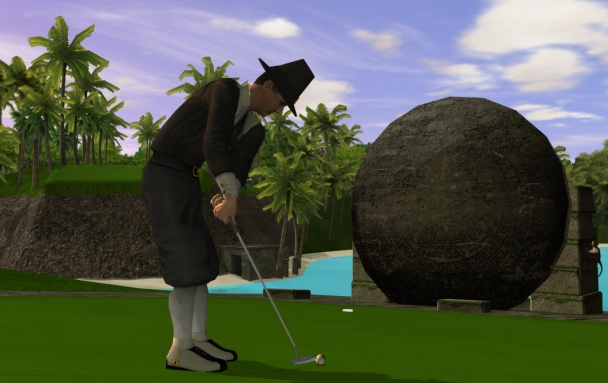 Ah, Thanksgiving, a time where gluttony is not only acceptable but also encouraged and annoying family members are tolerated with turkey comas and copious amounts of red wine.

We here at Golden Tee absolutely love this holiday, and we’ll be celebrating it in various ways over the next week. And while we ready all sorts of fun—including our yearly poem—we’re revisiting a classic Golden Tee Giveaway Code that can come in handy.

Oh, and a brand NEW Golden Tee 2013 Giveaway Code will be released shortly, so stay tuned for that. In the meantime, however, make sure you have the pilgrim gear for the big day.

To enter the code simply hit the "Options" button at any point during the game and highlight and select "Give Away Code.

After doing that, you'll then be prompted to enter a 10-digit code to receive the Thanksgiving clothing items. From there simply type in 13FEEDF00D (a one, a three, the word "feed", followed by the letter "F", two zeros, and the letter "D") and you will receive one of two items! The giveaway code may be entered twice to receive the pants and shirt, and you should already have the pilgrim hat which was released in 2008.

If you have it already, be sure to throw it on. And stay glued to Goldentee.com as we release an all-new Giveaway Code in the next week or so.

Needless to say, we’re getting in the holiday spirit.